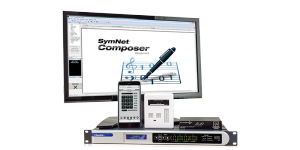 With SymNet Composer, integrators can use a single piece of software to streamline their programming, network discovery and Dante signal routing of SymNet hardware and multiple third-party products. The latest software version extends this capability to encompass Attero Tech’s newly-released unDUSB Dante interface.

“Attero Tech’s unDUSB is a very handy, driver-free 2×2 USB-to-Dante interface that will be deployed primarily for computer-based applications in conferencing systems such as Skype and Microsoft Lync,” explains Trent Wagner, senior product manager, Symetrix. “It can also assist with playback and recording on a PC, so should be very useful for the purposes of archiving meetings and recording courtroom sessions.”

“The response to our efforts to increase flexibility of control options in concurrent iterations of SymNet Composer has received a very enthusiastic reaction from systems integrators worldwide – and we expect that pattern to continue with SymNet Composer 4.0,” remarks Wagner. “The ease of third party device configuration is an obvious benefit to the SI community, and we expect to be in a position to announce further integrations in the near-future.”