In 1997, a startup company brought a couple of new products to a lighting trade show and put them on a 6-foot folding table. The products got quite a reaction ranging from dubious to ridicule. The company was Color Kinetics and the new products were LED PAR-type luminaires. Ten years later, Color Kinetics got the last laugh. They were acquired by Philips for $791 million.

LEDs have been around since the Kennedy administration, but back then you would find them on indicator panels and electronic toys, certainly not in instruments used for area lighting. Over time, two things happened to change that.

20 Every 10
The first is “Haitz’s law.” Roland Haitz was a scientist at Agilent Technologies who noticed that LEDs were increasing in brightness by a factor of 20 every decade while dropping in price by a factor of 10. That has been true since LEDs were invented and it is still true today. His work collecting information to support this claim let to Haitz’s law.

The second was when Shuji Nakamura invented a high brightness blue LED in 1993. That opened the door to the use of red, green, and blue LEDs in a lot of applications including the color-mixing fixtures Color Kinetics introduced a few years later.

Unless you’ve been out to lunch for a couple of decades, you know how many new LED products are coming to market. But there are also advances in discharge lamps (shorter, higher efficiency arcs and higher pressures), fluorescent lamps, and plasma lamps. But when it comes to key light — the main lighting for illuminating subjects — the entertainment lighting industry isn’t giving up its conventional incandescent and discharge lamps.

Incandescent lamps are terribly inefficient. For every dollar you pay for electricity to burn an incandescent lamp you get about $0.035 of light back. But brightness and efficiency are not the only measuring sticks for evaluating light sources. There is also the quality of light, the cost of lighting fixtures, and the operating expense.

When Color Kinetics trotted out their first color-mixing LED fixtures, they weren’t very bright. Back then, LEDs were not a great source for area lighting. But to paraphrase Haitz’s law, if today’s LEDs aren’t bright enough just wait. They’ll catch up. And they did. The question of the brightness of LEDs is moot. Now the focus is on the quality of light, the price and the operating costs. 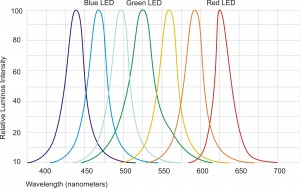 The theatrical lighting world has shunned using LEDs for key light because of the relatively poor quality of light. One of the problems is that the earliest LED fixtures were RGB color-mixing lights that fooled the eye into “seeing” white light by combining narrow bands of red, green, and blue light. That works relatively well for some applications, but trying to get Broadway lighting designers like Jules Fisher or Ken Posner to accept “relatively well” is like trying to teach a pig to fly. It just won’t happen. If LEDs are going to be totally accepted in the theatre they have to render colors and skin tones much better than RGB fixtures are capable.

Now some manufacturers are adding amber, white, and possibly other colors with the red, green, and blue. Selador, which was acquired by ETC in 2009, uses seven colors — red, green, blue, deep blue, amber, orange, and cyan. The idea is to fill in the missing wavelengths in the visible spectrum, kind of like the additives that are put in discharge lamps to complete the spectrum and raise the color rendering index.

Another quality of light issue with LEDs is dimming and flickering. Dimming LEDs is not easy because they are so responsive that sometimes you can see dimming steps instead of a smooth dimming curve. Most manufacturers have figured out how to smooth out the LED dimming curve by adding more steps of resolution and carefully manipulating the dimming curve. The toughest part is the last 10% just before it goes black. If you want to get an idea of how carefully an LED dimming curve is constructed, check out that last bit.

Flickering is an important issue if the lights are going to be used with video. The way LEDs are dimmed using pulse-width modulation (PWM) makes them susceptible to flicker on film or video, especially when they are dimmed below about 25%. Again, some manufacturers have been increasing the frequency of the PWM to eliminate video flicker.

But Wait, There’s More
With all of these improvements, LED technology is within a hair’s breadth of passing muster as key lighting. The color rendering of some is high enough to be accepted by some lighting designers and several theatrical productions are experimenting with them. It won’t be long until we’re there. One significant hurdle still standing is the cost of the fixtures.

Compared to conventional lighting, LED fixtures seem expensive. You can buy an inexpensive incandescent PAR can system with four PARs and a dimmer pack for about the price of one low- to medium-priced LED PAR-type fixture. Strong’s new Neeva LED profile spot, as another example, retails for $895 while an ETC Source Four ERS retails for about $300. But that’s hardly the whole story.

To match the color-mixing capability of an LED color-mixing fixture with a conventional stage light you have to throw in a color scroller and dimmer, which brings the cost more in line with the LED technology. Now factor in the operating costs over the lifespan of an LED versus that of an incandescent lamp and the LED option becomes the Blue Light Special. That’s because the lower power consumption translates to less electrical infrastructure and cost of electricity, and higher efficiency translates to lower cost of air conditioning to remove excess heat. Plus, the longer life translates to lower maintenance costs, including the savings from the cost of lamp replacement as well as the labor to replace them. It’s a sweet return on your investment. And it will get even sweeter.

According to the U.S. Department of Energy, the efficiency of white LEDs is rising at an astounding rate. Their projections show white LEDs reaching efficiencies of 150 to 200 lumens per watt before 2020. If that’s true, then don’t be surprised to see the lighting industry start using white LEDs with dichroic filters and/or colored gels because white LEDs will be so much more efficient than colored LEDs, even with color filters.

All LED, All the Time

But LEDs aren’t the only game in town. There are a couple of manufacturers like Robe and SeaChanger that built fixtures around a plasma lamp. This is a relatively new technology that uses a tiny capsule filled with gas and solids that create a plasma ball when it is pumped with microwave energy. It’s very efficient, has nice color rendering, and a long life of about 50,000 hours. Because the capsule is so small, it’s easy to gather all of the light coming from it so it has a high collection efficiency. There are not a lot of lights with plasma lamps available today, but who knows what the future will bring.

In response to plasma lamp technology, Philips has been pushing the technology envelope on discharge lamps, working hard to match or beat their efficiency. Their line of Platinum lamps is designed to compete with plasma lamps and they might be on to something. The Platinum lamps are similar to UHP projection lamps but they’re designed for entertainment fixtures. They have a very short arc, an integral dichroic reflector, which means that when you change the lamp you also change the reflector, and an electronic switch-mode power supply. Because of the short arc, the collection efficiency is high and the combination of the dichroic reflector and switch-mode power supply add to the efficiency of the system. Elation has a couple of automated lights with these lamps, including the Platinum 5R and the Platinum 15R, and they use less power and output more light than comparable fixtures.

In a perfect world, a light source would give us 683 lumens for each watt of electricity it was fed. In the real world, we get around 100 lumens per watt if we’re lucky. There is lots of room for improvement, and the improvements are coming rapidly. Now that you have some other measuring sticks for new and improved light sources you can tailor your technology to suit your needs.

SIDE BAR: Easy Being Green?

• How have “green initiatives” changed processes for lighting manufacturing companies?

Ford Sellers: “Lighting manufacturers are much more aware of the carbon footprint of our fixtures. Particular interest has been paid to efficiency of the units. Getting more lumens per watt, and lowering the amount of energy lost to heat have been major considerations in our fixture development at Chauvet. However, our green initiatives have not ended with the fixtures. We also have skylights in our warehouse which augment the need and use of fluorescent lighting fixtures, motion sensor lighting in the office spaces, and paperless accounting and human resources systems.”

Michael Graham: “Green initiatives have completely changed the process for manufacturing companies like us, starting just a few years ago. If you look at anyone’s catalogue from 2004, you will see almost no LED products. If you look at the CHAUVET line, you will notice that anything that could be replaced by LED has.”

• How has LED changed the landscape for the lighting industry from the manufacturer’s perspective?

• Is Plasma lighting the next step after LED, or will it take a place beside LED as another alternative to traditional fixtures?

Ford Sellers: “Alternative to, definitely. There are a number of technologies emerging to replace incandescent lighting. These include LED, plasma, and even fluorescent. We have found LED to be the most stable at this point. We were early adopters of LED technology in the entertainment lighting world, and have seen an explosion in the efficiency since we offered our first LED fixtures in 2004. The continuing upside on LED technology is amazing, and we expect to see a lot of longevity in both the technology, and the fixtures that we produce with it.

Plasma has also shown great strides, but has some drawbacks that kept it out of the running, for us. These include the high voltages required for generation of a plasma ball, the by-product of microwave emissions, and the fact that a plasma ball has mass, which can make its use in a moving fixture problematic. This is not to say that we will not be producing plasma fixtures in the future. For now, however, we are focusing our energies on development of cutting edge LED lighting fixtures.”

• What major requests from different markets have driven energy-efficient manufacturing innovation? In your opinion, have houses of worship been at all responsible for any specific innovations?

Ford Sellers: “Absolutely. The H.O.W. market has been critical in our fixture development. The requirements for flicker-free operation on video have driven our use of high-frequency switching power supplies. We are also driven by our desire to keep our fixtures as quiet as possible for houses of worship (where the ability to hear the spoken word and the necessity for silence play a very large role). Our use of radiant cooling in our COLORadoT and COLORadoT Tour units is a direct response to this noise issue.”

Michael Graham: “The market drives technology. The house of worship market is a large portion of the installation market and we definitely keep them in mind when we develop products. We know that market requires specific things like quiet operation, reliability, durability, and value pricing.”