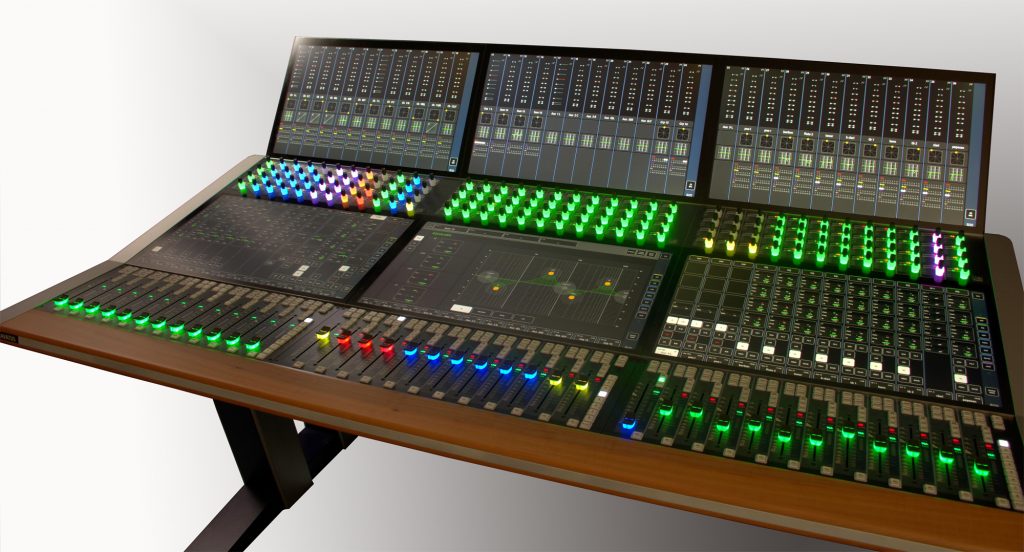 IP-based mixing console AVATUS
AVATUS is a highlight at the Stage Tec booth in Las Vegas with many new functions. The fully IP-based console has a completely new and intuitive operating concept. The clearly structured user interface simplifies operation without sacrificing functionality. AVATUS relies on color coding for control elements such as encoders and faders as well as user guidance without deep hierarchies. Two 21-inch FHD multi-touch screens per fader module provide the flexible user interface, a rigid central unit is no longer necessary. For the official market launch in June, AVATUS will be available in sizes between 12 and 96 faders and in various hardware versions. Removable PoE-powered metering screens underline the modularity of the AVATUS system and enable optimal adaptation to every conceivable application.

The compact audio mixing console CRESCENDO
In Las Vegas, Stage Tec will present CRESCENDO, a compact multifunctional talent for broadcast, theatre and live. The latest feature is Waves integration. Users can then connect the Waves plugins directly to the scene automation. Further features CRESCENDO offers are the timecode trigger in scene automation, the extension of the equalizer to eight bands and parallel compression.

NEXUS Audio Network and Router
NEXUS, the Stage Tec audio network, offers interfaces to all standards and also covers the current IP formats with the latest RIF67 and XFIP boards. These NEXUS components will also be presented in Las Vegas. In March, there was a test event organized by the Joint Task Force on Networked Media (JT-NM) in Houston, Texas, in which Stage Tec participated with the XFIP/RIF67 product. JT-NM promotes the development of interoperable IP technologies for professional media through standardized test procedures. JT-NM is supported by the European Broadcasting Union (EBU), the Society of Motion Picture and Television Engineers (SMPTE) and the Video Services Forum (VSF). For Stage Tec, the participation of the XFIP/RIF67 product in the ST2110-30 and ST2022-7 test procedures was a complete success. At the beginning of April at NAB, Stage Tec will receive the “JT-NM Tested” label.

NEXUS offers two interfaces for AoIP connections: RIF67 for 6-RU systems and XFIP for 3-RU systems. Both boards are based on DirectOut’s AES67.IO module and support the AES67/Ravenna protocol. They also comply with ST 2110-30 and 2022-7 standards, which support interoperability in audio networks. On the control side, NEXUS also offers an Ember+ gateway via the NEXUS XACI board in addition to an in-house system.The NEXUS XDIP board has been available for Dante AoIP networks since 2012. In Las Vegas, a new firmware for XDIP will be introduced, which enables the Yamaha consoles of the CL/QI series to be connected to NEXUS via the RIO protocol.