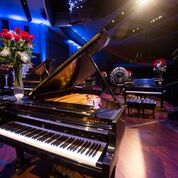 The School of Church Music at Southwestern Baptist Theological Seminary (SWBTS) continues to turn to DPA Microphones for its annual ‘Keyboards and Carols at Christmas’ event. As with previous years, the production team once again relied on d:vote(tm) 4099 Piano Microphones on each of the pianos, this time opting to install three microphones in the grand pianos and two microphones in the baby grand pianos, utilizing 30 microphones in total. The school also selected four d:facto(tm) Vocal Microphones with Shure wireless adapters for the event’s soloists and presenters.

Now in its fourth year, the holiday concert featured four Steinway Grand Pianos, nine Steinway Baby Grand Pianos, one organ, an adult choir and a children’s choir. This group of student and professional musicians, which ranged in age from four to 70, performed holiday songs for the event’s biggest audience to-date, over 2,500 attendees.

“This is the third year we’ve been using DPA microphones, and we’ve found our sweet spot,” says Brad Powers, assistant director for audio and chapel production in the newly established Audio Visual Arts Department at SWBTS. “We pretty much stick to tradition at this point. When I came on, I was informed that we had used DPA microphones for two years in a row. I gave the mics a listen, and I honestly wouldn’t have used anything else.”

The consistency of the sound has been the major draw that brings the school back to DPA each year. “I was surprised at how little EQ it took to get the microphones set up,” continues Powers. “It minimizes time to get the production miked up. The d:vote(tm) mics were so easy to install in the piano because of the magnetic mount, which allows you to place them wherever you need. They have an impressive natural sound and flat response, which makes it easy to get the pianos sounding great very quickly. The design of the mics also ensures that you can’t see them, which is crucial in a production like this where there is so much to mic on one stage.”

In addition to using the microphones to amplify the pianos through the PA system, the school also “had a main piano that pumped through the stage monitors placed near each of the pianists,” adds Powers. “I was surprised at how much gain before feedback I got with that setup; those monitors were blasting. The microphones performed wonderfully and like every year prior, we received rave reviews about how good the pianos sounded. With the existing audio system in place, I was able to get the sound especially perfect this year. I don’t think it could have gone any better.”

The audio team at the seminary are such fans of DPA microphones, that they also have d:vote(tm) microphones installed in the main piano at the school’s chapel. “We own eight of the instrument mics and we are working on purchasing more,” says Powers. “I’m also planning to demo some choir microphones because that’s something we’d like to incorporate for next year’s performance. We’re aiming to be a complete DPA presentation.”

SWBTs’ new Audio Visual Arts Department is different from the AV communications department that previously oversaw the concert in that the former is run by the music school, whereas the latter is part of the communications department. This new arrangement will allow them to “work more closely with the music school to ensure that they get the sounds they want and be able to help with any AV needs more efficiently,” explains Powers. “We’ve been really fortunate to have a crew who has an ear for sound and music, so that’s been very helpful.” The school also has a music academy for weekly vocal or instrumental lessons for younger children who also performed during the concert.

“I just want to say thank you to everyone at DPA Microphones for working with us for all of these years and providing a means for us to use your microphones for each performance,” concludes Powers.

ABOUT DPA MICROPHONES:
DPA Microphones is the leading Danish Professional Audio manufacturer of high-quality condenser microphone solutions for professional applications. DPA’s ultimate goal is to always provide its customers with the absolute finest possible microphone solutions for all its markets, which include live sound, installation, recording, theatre and broadcast. When it comes to the design process, DPA takes no shortcuts. Nor does the company compromise on its manufacturing process, which is done at the DPA factory in Denmark. As a result, DPA’s products are globally praised for their exceptional clarity and transparency, unparalleled specifications, supreme reliability and, above all, pure, uncolored and undistorted sound.