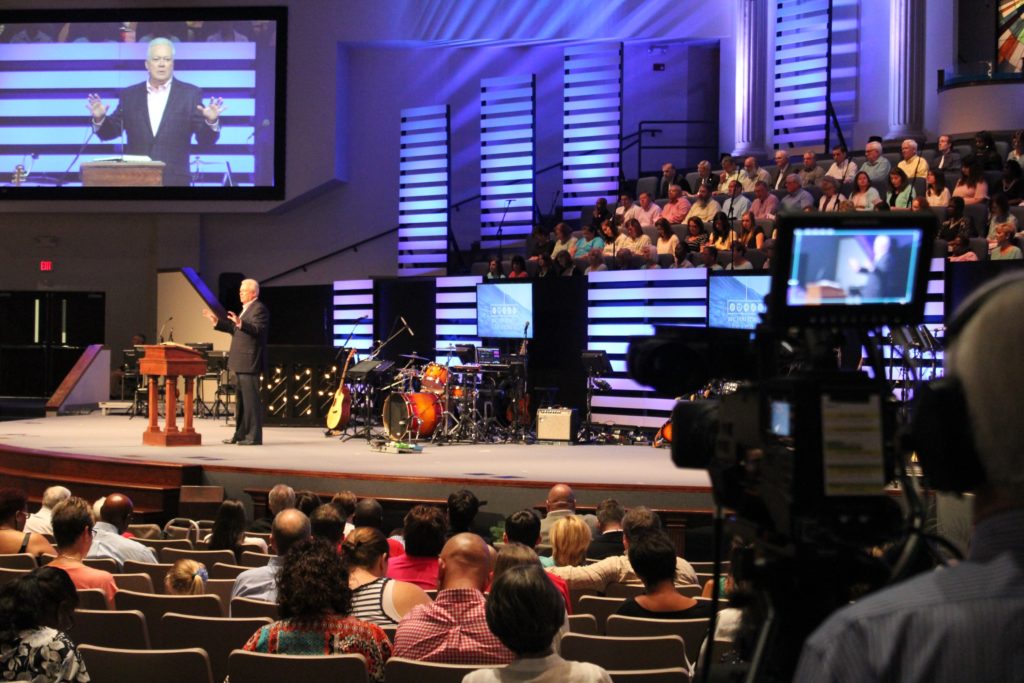 Sherwood Baptist Church (Albany, GA) recently completed a total upgrade of its A/V systems with a broad selection of Panasonic professional video gear including P2 HD camcorders,  4K and HD pan/tilt/zoom cameras, and the AV-HS6000 2ME production switcher.
Sherwood Baptist serves a congregation of more than 2,000 worshippers, and is well-known for its production company Sherwood Pictures, which has produced several Christian-themed dramatic films, including Facing the Giants (2006) and Fireproof (2008), both shot with Panasonic VariCam cinema cameras.
Neil Philpott, systems advisor, and John Hogg, engineer, for dB Audio and Video (Gainesville, GA), supervised the overall installation and system designs, which was driven by the need to replace aging gear and an imperative to advance into 16:9 high-definition production.
“With Panasonic, we can count on excellent products, superior price/performance and a serious understanding of the needs of the HOW market,” said Philpott, whose company specializes in HOW systems integration.
The main application for the Panasonic cameras and switcher is live image magnification of the weekly morning and Sundayevening services. Philpott explained that three AJ-PX380 shoulder-mount camcorders are used in studio configuration in the sanctuary, while two AJ-PX230 handhelds are utilized on and off tripods for point-of-interest shots on and near the altar stage.
Three AW-HE130 PTZs are mounted on the balcony face: during the pre-service and music/worship portion of the service, the HE130s are used for typical front-on shots, while during sermons they capture special interest shots that are mixed from one of the HS6000’s ME busses for recording and streaming. The 4K AW-UE70 is mounted over the main stage for special interest congregational, instrumental and baptistery shots. All four PTZs are controlled by one AW-RP120 remote camera controller.
The powerful HS6000 switcher is the crux of the upgrade, handling live broadcast feeds of services to the large projection screens, as well as to the rear choir loft and several small rooms equipped for remote worship.
Dan Mingo, Sherwood’s Pastor of Media, said the nine Panasonic cameras have dramatically improved shot angle options during services.
“Our sanctuary stage is quite steep, and prior we had no PTZs, which have been instrumental in expanding our shot coverage, notably of our baptism ceremonies,” Mingo said. “The image production is significantly crisper and clearer, and the cameras are very easy to use, a meaningful asset because all our camera operators are volunteers,” he added.
“I worked closely with Neil on the selection of the HS6000,” Mingo said. “I’ve had my eye on it since its introduction, and I really feel it can’t be beat on price/performance. It’s a very simple switcher to use with a clean, intuitive layout, yet at the same time has more than sufficient I/Os (34 inputs/16 outputs). The four independent MultiViewer channels are a key benefit for us. Altogether, I feel there is no better option in a switcher for HOW.”
For more information about Sherwood Baptist Church, visit www.sherwoodbaptist.net.
For more information about dB Audio & Video, visit www.dbaudioandvideo.com.
About the AV-HS6000
The HS6000 is a powerful, cost-effective 2 M/E switcher with 32 HD-SDI plus two DVI-D inputs, 16 HD-SDI outputs, 16 keyers, four independent MultiViewers, expandable clip storage, a Web server and many other advanced features.
About the AW-UE70
The UE70 is the professional video industry’s first integrated 4K pan/tilt/zoom camera, delivering 3840 x 2160 resolution images at 29.97p/25p via HDMI, and also capable of 4K IP streaming and in-camera 4K recording. The UE70 offers genlock, Optical Image Stabilization (O.I.S), and remote switchable ND filters.
About the AW-HE130
The AW-HE130 P/T/Z incorporates new high-sensitivity; low-noise 1/3″ 3-MOS imagers that produce stunning pictures, even in low light conditions. Features include Power over Ethernet+ (POE+) for easier integration; and multi-stream transmission of H.264 HD video and audio (up to 1080/60p at 25Mbps.).
About the AJ-PX380
The PX380 1/3-inch 2.2M 3MOS AVC-ULTRA shoulder-mount camcorder offers powerful IT/wireless connectivity capabilities and dual codec recording for simultaneous high resolution and proxy image capture. The PX380’s multi-codec AVC-ULTRA affords master-quality and/or low-bit-rate 10-bit, 4:2:2 recording in full raster HD to meet a variety of user needs from mastering to transmission.
About the AJ-PX230
The economical APX230 AVC ULTRA handheld camcorder provides the quality, image control and much of the functionality of its predecessor, Panasonic’s popular AJ-PX270. Offering 10-bit, 1080p AVC-Intra and AVC-LongG codecs, extensive video control, a 22x zoom and lens and OLED viewfinder, the PX230 camera is ideal for a wide range of applications.
For more information about Panasonic professional video products, visit www.panasonic.com/broadcast, or contact Panasonic at 877-803-8492.