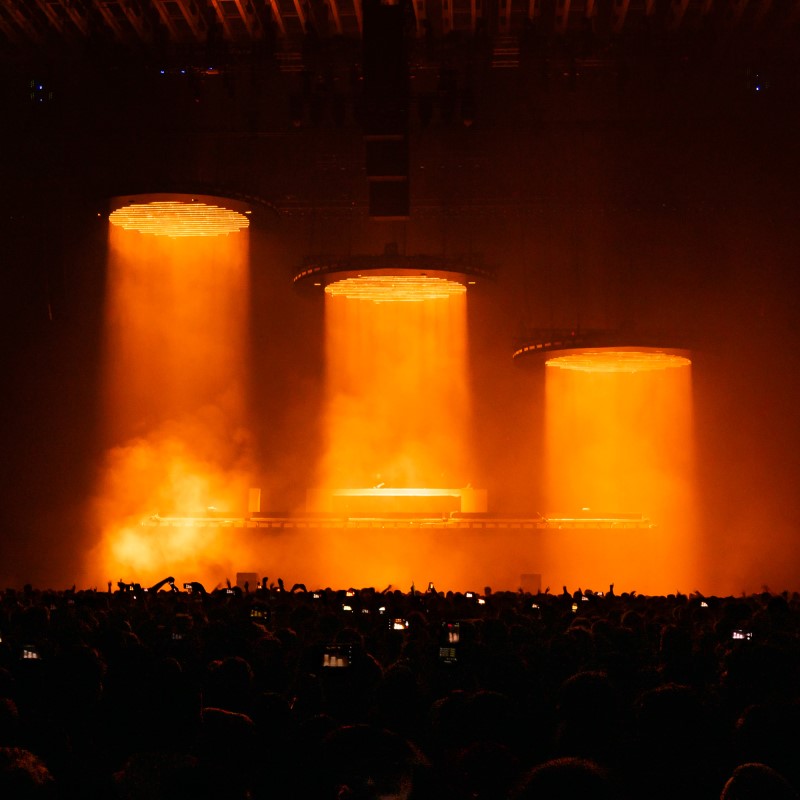 Despite having worked with two members of the legendary Swedish House Mafia, Axwell and Sebastian Ingrosso, in a one-off show in San Francisco—largely seen as a precursor for a full band reunion—when the time came, Vision Factory production designer, Sam Tozer nevertheless had to pitch for the gig.

At the Bill Graham Civic Auditorium gig he had gone heavy on GLP’s hugely popular impression X4 Bar 20s and equally en vogue JDC1 hybrid strobes, and that same formula worked for him again at the House legends’ comeback shows at Stockholm’s Tele2 Arena. It quickly became clear that this would be no ordinary EDM experience.

Again assisted by LD, Alex Hess, he said, “I already knew the feel of the performance the boys would want to create, so the process became fairly collaborative. Being a comeback show it needed to be stylistic, monologic and be something that no-one had seen before.”

The three artistes, whose performance took place on a ’floating’ platform, became heavily involved in the entire process as did creative director, Alexander Wessely. “They knew they wanted a giant screen and have lighting based on three circles. Alex [Hess] and I worked side by side to create a new style of lighting rather than a simple EDM look that people were probably expecting.”

The mainstay of the rig was three 7.2m circular 4-tonne trusses on Kinesys motor control, with a pipe grid across the circles. Tozer commandeered a matrix of GLP X4 Bar 20s, with no fewer than 82 fixtures pixel mapped on each circle. This formed part of a complement of 140 lighting fixtures and multiple lasers within each circle. “Being on motor control we could reveal them in out and tilt them 90° as well,” stated Tozer.

“As for the 60 JDC1s. these were the workhorse for the large blinder and strobe looks,” he confirmed. “We used both the strobe feature and LED plates to add dynamic to the performance; the platform [on which the group performed was also complimented with another 55 x X4 Bar 20s, sunk into the ground.”

All 361 GLP products used on the shows were sourced from Christie Lites as was the rest of the lighting, the rigging and motor control. “We had great support from Dave Stewart and Mark Ravenhill at GLP, as well as Andy Strachan [Christie Lites’ account rep] and his team.

Strachan, himself, handed out similar plaudits. “Working closely with Sam on previous shows I have got to know he has a very clear vision of how a particular design must look from the start. For the Swedish house Mafia in Sweden this was no exception.”

Of the contribution made by the GLP FX, products themselves, Sam Tozer said, “It’s simple—GLP creates products that are designed for a purpose. Their fixtures perform a unique task and have a unique aesthetic with both the light output as well as the look and feel of the product. When choosing my fixtures, I think about the look of the light as well as the output and I find GLP matches this every time.”

Consequently, the shows were a massive success “and people are still working out how we did it.” Andy Strachan agreed that it was like nothing he had seen before. “I would say this was one of the most challenging shows technically I have ever had to deliver for Sam and tour director, Mattie Evans. It required over 100 DMX universes of gear which our data tech Rich Shout managed perfectly.

“They know how to deliver a great show and trust people around them to have the same work ethic. Sam’s vision was worth every second of work when we watched the end result.”

But the final word comes from the production designer himself. “These shows weren’t all about strobes and loads of moving lights though,” he said. “We wanted to create a dynamic range of looks and emotions to coincide with their music, and I thought we did this very successfully.”