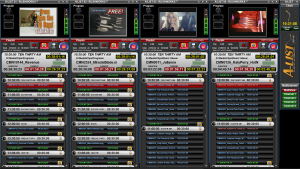 Working with Myers, a pioneer in broadcast management software, early adopter of BXF and author of the ProTrack traffic and billing system, RUSHWORKS has implemented the most common subset of the SMPTE-developed BXF schema, focusing specifically on the needs of PBS affiliates and others who are seeking alternative software/hardware automation platforms in the wake of Avid’s discontinuation of its legacy Sundance-based systems. Integrating ProTrack with A-LIST gives a significant number of affiliates the ability to migrate to a cost-effective and much less complex system that conforms to their current operations topology.

“These PBS stations must be able to sustain their current workflow with minimal interruption,” said Rush Beesley, President of RUSHWORKS. “The uncertain state of the industry means doing more with less across the board, and that means replacing Big Iron systems with powerfully simple and affordable alternatives,” Beesley maintained.

Ironically, Beesley was the founder and original President of Sundance Digital, Inc., a company ultimately acquired by Avid. One of the first adopters of the Sundance System was Idaho Public Television, followed by KERA, a PBS flagship station in Dallas. Beesley “fell in love” with PBS early in his career, even recording a rock version of the theme from “Sesame Street” in the 1970s.

“We’re delighted to have the opportunity to take this full circle,” Beesley said. “Once again we can provide a means for PBS stations to maintain their operations schedules, and continue to deliver one of the greatest content treasures in the country.”