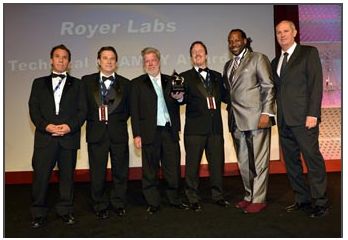 have made “a profound difference in the way engineers record music”

Burbank, CA… Royer Labs, a leading manufacturer of high quality ribbon microphones, is pleased to announce that on February 9th, 2013, the Company received the prestigious Technical GRAMMY® Award for its ribbon microphones and the profound impact those microphones have had on the recording process. Technical GRAMMY Award recipients are determined by vote of The Academy’s Producers & Engineers Wing Advisory Council and Chapter Committees, as well as The Recording Academy’s National Board of Trustees. The award is presented to individuals and companies who have made contributions of outstanding technical significance to the recording field.

Recognizing the significance of the Technical GRAMMY Award was Neil Portnow, President/CEO of The Recording Academy, “Each year, The Academy has the distinct privilege of honoring those who have greatly contributed to our industry and cultural heritage, and this year we have a gifted and brilliant group of honorees. Their exceptional accomplishments, contributions, and artistry will continue to influence and inspire generations to come.”

The Recording Academy offered the following in regard to Royer Labs and their ribbon microphone technology, “Royer Labs’ line of ribbon microphones has made a profound difference in the way engineers record music. The Company’s ribbon technology is extremely natural sounding and brings a more realistic, analog sound and feel to digital recordings and live sound reproduction. In the ’90s, Royer Labs single-handedly brought ribbon microphones into mainstream recording. Older ribbon microphone designs had fallen out of use in the ’60s due to low output and because they were heavy and fragile. Royer designed a radically different line of ribbon microphones — small, lightweight, durable, and achieving incredible sound — which were revolutionary and moved the art of recording forward. Royer’s innovations continue to win the praise of artists, producers, and engineers today.”

Chief Engineer David Royer (after who the Company is named), Rick Perrotta, President of Royer Labs, John Jennings, the Company’s VP of Sales and Marketing, and Rafael Villafane accepted the Technical GRAMMY Award during the ceremony, which was held at the Wilshire Ebell Theater in Los Angeles. “I couldn’t possibly be more proud,” states Perrotta. “Royer Labs was formed with the goal of bringing ribbon microphones back to mainstream recording by way of David’s unique, modern-ribbon microphone designs. This award brings us full circle and validates all the work that it took to get us to this point.”

Jennings was equally enthusiastic, “Thank you, Recording Academy, for this tremendous honor! Ribbon mics had, for the most part, been forgotten by the recording community at large, but we knew what they were capable of. When David showed us his original R-121 design, we knew it was a game changer. It was a radically new approach that brought the ribbon mic into this century. We also saw that the replacement of analog machines by digital recording systems created a real need for the warm, natural sound of ribbon microphones. With this award, our slogan ‘Analog Warmth in the Digital Age’ seems more relevant than ever.”