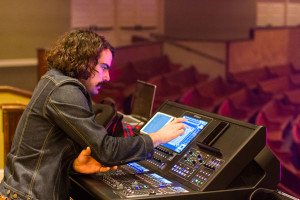 Christian singer/songwriter Andrew Peterson’s Behold the Lamb of God tour has become a Christmastime staple. Named for the artist’s 2004 LP, the tour brings Peterson across the country with fellow musicians each December. The first half of the concert comprises storytelling songs with each guest artist on the tour; the second half is spent performing Peterson’s Christmas album sequentially from beginning to end. The tour culminates in an annual performance in the Ryman Auditorium in Nashville. On this year’s edition of the tour, mixer Nolan Rossi took along a Roland M-5000 Digital Mixing Console to simplify the complicated task of mixing monitors from the FOH position.

“I’ve been touring and doing monitors and front-of-house for about eight years now,” says Rossi, who has worked with a number of other Christian artists including John Mark McMillan and as front-of-house engineer on Crowder’s “Neon Steeple” tour. “Andrew Peterson’s Behold the Lamb of God tour takes four or five guests out on the tour and we’ve got eleven people on stage — strings, percussion, drums, piano, guitars, a lot of singers. It’s a fairly big production.”

Rossi and the Roland M-5000 were connected in a unique manner. He’s a regular contributor of equipment reviews to pro audio magazines, and an editor asked him to check the M-5000 out. “I don’t like to just have the board in the shop for a couple of days and play with it; I like to try to actually get into a real working scenario with it to really put it through the paces and see how it will perform,” he says. “The timing just ended up working out with this tour, and from what I could tell, just from the literature, it seemed like it would do what I needed it to do for this tour. I decided to give it a go.”

The Roland M-5000 comes with up to 128 channels assignable to 28 faders, a 12-inch interactive touchscreen display, and 24-bit/96-kHz resolution — just what a complex production like this one needed. “The flexibility of the board and being able to configure as many outputs as you can, that part of it put me at ease,” he says. “Not that mixing monitors for eleven people and also mixing front-of-house is an easy thing to do, but knowing that I didn’t have to worry about a limited number of outputs and knowing how versatile the console recall is, in terms of all the different parameters that are available to use and to recall, was great. I appreciated how easy it is to just get around the console. I found that the touchscreen was really intuitive — it wasn’t complicated to get what I needed out of the board.”

Rossi was just as impressed sonically with the M-5000 as he was with the console’s functionality. “The audio quality of the console is very clean. I’ve even had comments from some of the house engineers and house system techs, even as I was just playing music when I would tune the room. It feels very transparent and accurate. Everyone had good things to say about how the show sounded every night.”

Rossi emphasizes the M-5000’s ease of use, comparing its touchscreen to iPads and other intuitive tablets. “I’ve mixed on just about every console there is out there, and once you start using a touchscreen, I think everyone ends up comparing things to Apple’s design on the iPad in terms of ease of use and how it feels, and to me that’s what it actually felt like getting around on the M-5000,” he says. “The touchscreen was really responsive and it’s just a smooth, easy experience. You’re not overwhelmed by menus and submenus of options. With all the flexibility that the console has, it’s still really easy to get around and to use it. And all the ways that you can customize fader banks, customize your knobs and configure your coders – it’s all really smart and intuitive and just makes the board easy to use. This really was something completely new to me, and I adapted pretty quickly. I think that’s a nod to how well Roland designed it.”