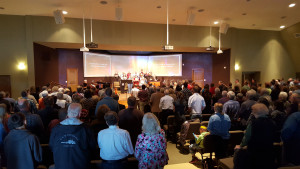 The First Southern Baptist Church in Pratt, Kansas, had the kind of problems that most churches wish they had: they were growing fast and had reached the point where they needed additional services each weekend to accommodate the nearly 800 people in the congregation. Its physical plant could not keep up. Enter Builders for Christ, a non-profit that gathers volunteers to construct church buildings for needy congregations at no cost. Last year, the organization constructed a new building for the First Southern Baptist Church, one that far better accommodates their growing flock. Thanks to Advanced Sound & Communication, a Kansas City-based AV company, they now also have a state-of-the-art media center for their AV needs that includes a new projection system with wraparound screens, five projectors, three Apple iMac computers, PTZ-networked cameras, and an entirely new PA system including speakers, consoles and wireless microphones. At the heart of that video system upgrade is the Roland XS-84H 8-In x 4-Out Multi-Format AV Matrix Switcher, part of the new Roland XS Series line of Multi-Format Matrix Switchers designed for fixed installations requiring high-quality integrated video and audio conversion and switching. The XS-84H is a single-unit solution for total control of video and audio that is flexible enough to meet the diverse needs of classrooms, conference rooms, live presentations and houses of worship.

“Builders for Christ is kind of like the Habitat for Humanity for churches. They take submissions from all over the United States, choosing only a couple out of thousands of requests, to come build a building for them,” explains Brent Handy, Audio, Video, Lighting and Electronics Designer and Sales Consultant at Advanced Sound & Communication, Kansas City, MO, which provided much of the new church’s AV systems. “The projects are chosen based upon church growth, evidence of effective ministry, number of baptisms, etc. This church in Pratt, Kansas, has a pretty good-sized congregation for the amount of people in that town. They were busting at the seams, having multiple services, and met all of the criteria. So, the organization agreed to build them a church. And so this particular building was built in the shortest amount of time they’ve ever built one.”

Both Handy and the project consultant recommended the Roland XS-84H matrix switcher and Roland HD Base-T extenders and receivers. “The Roland was chosen because doing this job with other brands would take many, many more pieces of equipment, adding more points of failure, and expense,” he explains. “And so, this box basically does it all in one nice, neat package and comes in at a great price point.”

As a result, the church’s media system now has three 16:9 screens illuminated by three projectors, with two more projectors for environmental projection on either side of the screen. By utilizing the multiple switching and screen processing modes in the XS-84H, the church can switch between “Span Mode,” which extracts the horizontal center portions of the video then splits and scales the content and sends each half to a separate output, and “Matrix Mode” (in conjunction with Pro Presenter software’s multi-display option), to put graphics or lyrics up on each side and IMAG video in the middle. They can then swap it around however they want to on the fly, all controlled by the XS-84H’s iPad option, which allows just two volunteer staffers in the church’s small control room to remotely control the XS-84H via presets set up by Handy and his team.

“There’s really nothing else like it in that price point, and there’s really nothing else out there that has the visual feedback that the XS-84H has,” says Handy. “That’s another reason why it was chosen: a lot of competing products don’t have volunteer friendly operation and visual feedback — the Roland has that function: it gives you your inputs and your outputs and shows you what’s routed all at the same time. That’s a huge benefit. The Roland is really the heart of the AV system, and it will take the church many years into the future.”