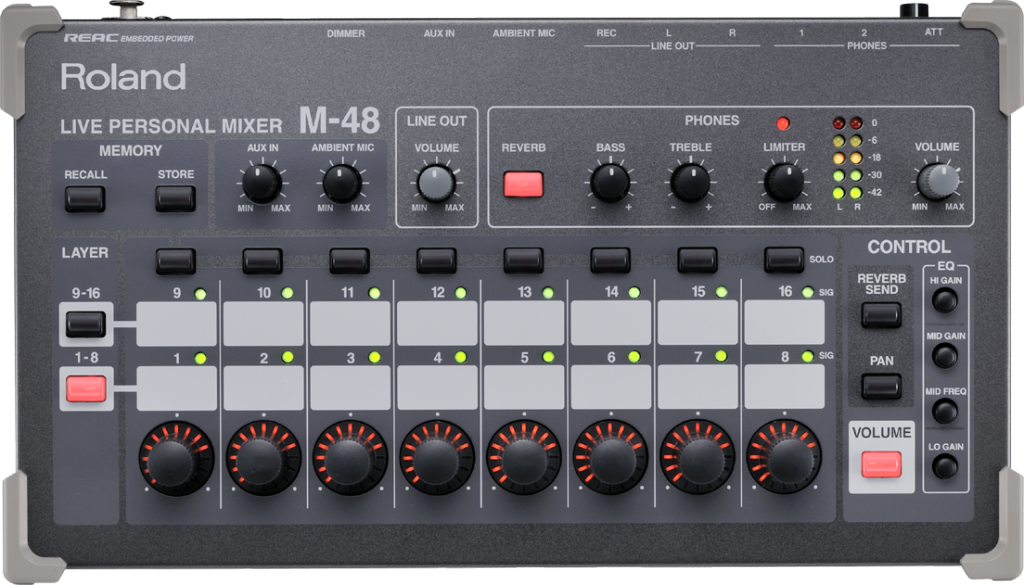 I was first exposed to the Roland M48s when looking at the DiGiCo consoles at a trade show. Matt Larson, a DiGiCo representative, mentioned the possibility of utilizing one of the MADI outputs of the Digico to feed the Roland’s Reac MADI bridge interface with the Roland M48s Personal Monitor Mixers, and that using them in conjunction with the MADI out of the console would give us the possibility of having a 40 channel matrix feeding to the Roland system from the Digico console.  This really caught my attention because it would open up a whole new world of monitoring capabilities for our rhythm section and our other musicians, compared to our existing headphone system, on which all musicians had to share 16 channels of the same sources.

We ended up purchasing 18 Roland M48s specifically for their interfacing ability with our DiGiCo SD5 console in the Sanctuary. We also incorporated the M48s into our youth center, where we have six to eight boxes feeding from a Digico SD-8 MADI output.

In the Sanctuary we use them with the band; five M48 boxes in the brass section, one at organ position, three for guitars, one for bass player, one for drummer, two in the percussion section and three in the keyboard area, one for choir director, and then one box at front of house.  Everybody would love to have their own box, but where we could pair them off to save money, we did.  To ensure that those sharing a box could all hear what they needed to, I fed the stereo out of a Roland M48 to a Furman SP20 amplifier and from there to a Furman HR2 headphone box. I loop the HR2’s from box to box in a particular section, and they can hear everything that’s being mixed in that section. This allows each player to have their own volume control for the mix. Our main keyboard player is on wireless ears fed from his M48 stereo out to a Shure PSM1000 system. We went with Shure in-ears systems for the musicians that needed the more level and low end, Shure 535’s for the drummer, the bass player, the keyboard player, Shure 425’s for the vocalists, and Shure 215’s for the brass section. Some of the players in the rhythm section still prefer to use Sony 7506 headphones.

We can monitor and take control of different boxes from the FOH if there is an issue, recall settings, etc., and the presets are a great advantage for different players/different drummers.  We can set-up a default setting for many of them, which saves a lot of time during set-up.  A great advantage to the M48s is that they free up time for the FOH engineer to focus on the main mix, while giving the musician exactly what they need. Once the feeds from your board to the Roland 40 channel matrix are figured out, you can arrange your mixes out of the software to customize each player’s box with what they specifically need on their 16 stereo groups. Instead of just limiting them to 16 channels, they’ve all got access to what they choose from the 40-channel matrix.

Some of the decisions we had to consider were where we were going to place floor boxes on stage, what type of mounting hardware to use, what stands would be best, etc.; setting them up was no problem.  For flexibility, we used 3 of the Roland S-4000D REAC splitters to feed the stage, so the brass section has its own floor box with eight channels, one for the rhythm section/ keyboards (eight channels) and one for the middle section of the stage with eight channels.

It did take some forethought to map out the set-up, but once we figured it all out and got everything installed, it only took a little tweaking to get it going.  Setting up the brass section mixes with the M48s , was a bit challenging, mostly because the musicians had to share boxes (2 per M48). However, the learning curve, particularly with the rhythm section, was pretty immediate.  It didn’t take much for our musicians to ‘get it’.  It was a bit more challenging with the brass section, since they weren’t used to in-ears or to mixing, but they learned quickly. Utilizing virtual playback to re-listen to what they had played, allowed them learn to the mixer and to hear problem areas. 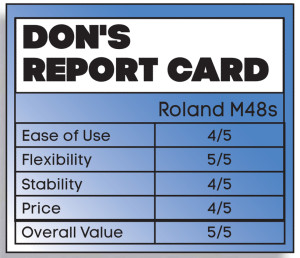 With everyone on the M48s, we can now use click-tracks for the whole band, which is something we needed, because the stage is split with brass on one side and rhythm on the other. Both sections can now hone in on what they’re playing and hear what others are doing and can stay really tight on the tempo.

The Roland M48s have been a great addition to our worship; utilizing the MADI interface capabilities of the DiGiCo console has opened a lot of options for us, and being able to build a 40-channel matrix provided by the Roland system was imperative.  We’re very happy we made the decision to use them!

Don Kendrickis the Director of Media Services at Central Church in Charlotte, NC.  Visit them at www.centralnc.org