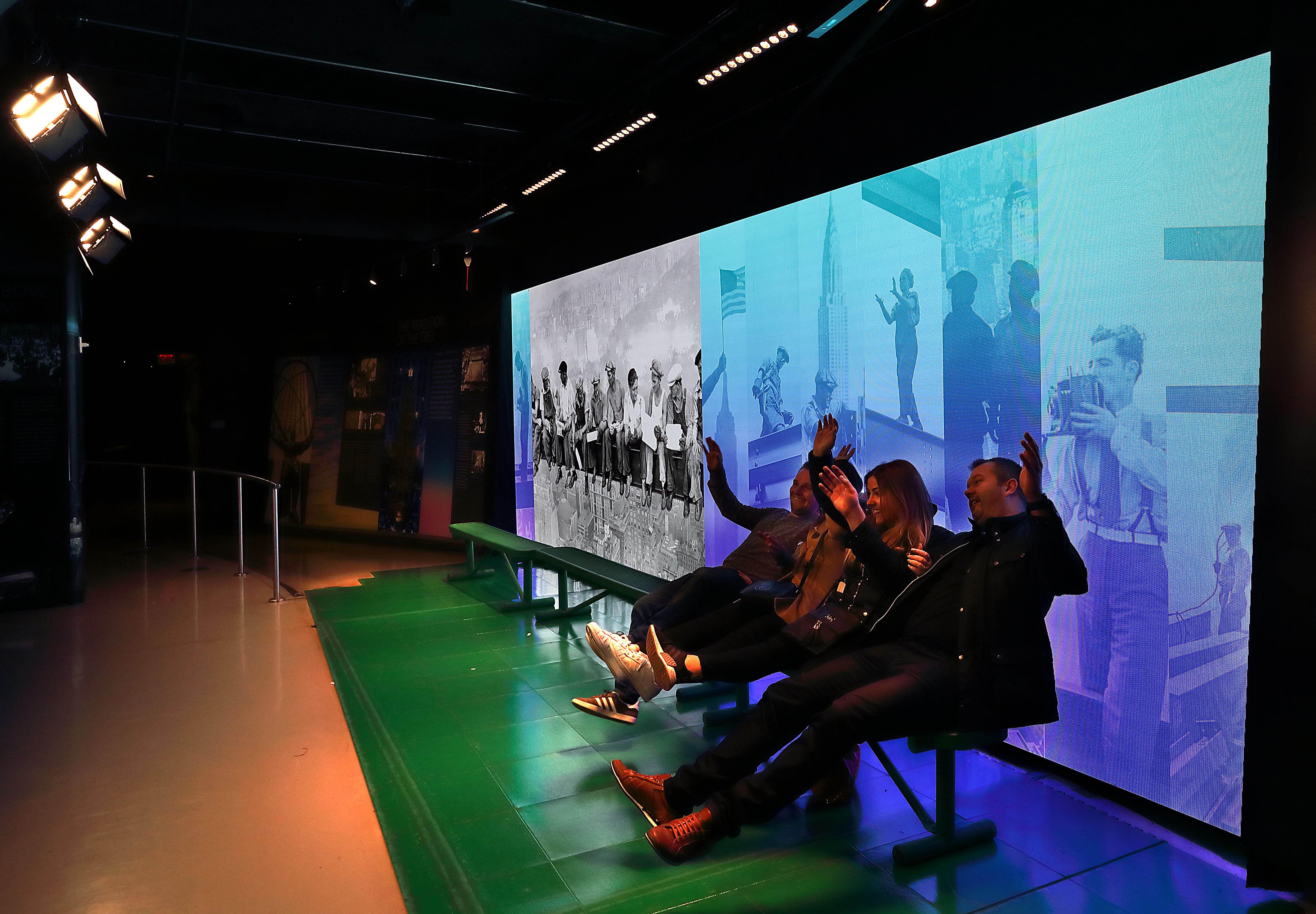 New York, NY – InfoComm booth #743…For anyone wanting to see New York City in all its splendor, nothing beats the Top of the Rock at the iconic Rockefeller Plaza. This six-level observatory atop the Art Deco 30 Rockefeller Plaza reaches 850 feet above street level—providing 360-degree views of the New York City skyline in the process. In the area that serves as the cue space for the elevator ride to the top, there is now a vibrant 25-foot wide by 9-foot high LED display that serves as a point of information about the observation deck and the museum that accompanies it. The display is comprised of 84 Rhodium P2.85 LED cabinets drawn from the impressive catalog of Lakeland, FL-based Vanguard LED Displays.

Paramus, NJ -based Synapse Audio Visual Designs, LLC, a design build firm that specializes in demanding technical and artistic audio, video, and lighting deployments for the hospitality industry, was contracted to design and deploy the new LED display at Top of the Rock. Stephen Cannella, one of the firm’s Managing Partners, is directly involved in both sales and system engineering. He discussed the project and his reasons for selecting Vanguard LED Display’s Rhodium Series P2.85 LED panels.

“For the Top of the Rock, we used Vanguard’s Rhodium model P2.85 panels,” Cannella explained. “The display is configured seven units tall by 12 units wide, for a total of 84 panels. We chose Vanguard because of the company’s relentless attention to customer service. When making this type of investment in technology, you need to know the company will be there to service you years into the future and that they care enough about your firm to act quickly.”

The video wall at Top of the Rock is located at a photo opportunity site hosted by the firm PicSolve, which is under a partnership with Rockefeller Plaza. Picsolve offered a unique technical solution that facilitates having thousands of guests walk past a mock ‘I’ beam and, by the time they go to the top of the tower and come back down, they can purchase a photo booklet of their family composited into the famous ‘lunch atop a skyscraper’ photo. During normal operation, the wall plays an on-brand screensaver bringing attention to the photo service and when the shutter of one of the cameras opens, the wall momentarily turns chroma key green—and Picsolve’s proprietary software enables guests to be composited into an image of the NYC skyline.”

Vanguard LED Display’s Rhodium Series LED panels have a rich feature set, including a native 16:9 aspect ratio. Therefore, if a display has the same number of cabinets horizontally and vertically, the display will be in a 16:9 aspect ratio. Further, all frames can be suspended, wall mounted, recessed, and ground supported, and they are serviceable from either the front or rear. Commenting on the Vanguard Rhodium Series LED cabinets, Cannella added, “We have installed many video walls and the hallmark of Vanguard LED Displays was how easy they are to assemble. Their alignment, brightness, and color consistency are perfect out of the box, and the video image is vibrant and consistent.”

The new LED video wall at Top of the Rock was completed during the 2018 Holiday Season—three days after the annual Christmas tree lighting at Rockefeller Plaza. “Top of the Rock management had been batting the idea of replacing their photo exhibit for quite some time,” Cannella reports. “As soon as we made contact, we worked to fast track the project, going from conceptualization to finished install in about three months.”

With the new Vanguard video wall up and running, the setup has been generating rave reviews from all who encounter it. According to Jen Freely, Director of Technology at Picsolve, “The Vanguard wall photographs perfectly. We have used every video wall on the market, and this is the first one we are truly happy with.” BJ Delacruze, Director of Operations for Top of The Rock, is equally impressed, “As an institutional buyer, we need to be thinking of longevity with our purchases. With Vanguard, I’m not concerned about not reaching my return on investment!”

Before turning his attention to the business of the day, Cannella offered these parting thoughts, “Within the first hour of the system going live to the public, it was a hit,” Cannella says. “The unique application serves a dual purpose of rebranding the Top of The Rock exhibit, while also expertly supporting the unique technical changes of this atypical video wall deployment. With the space serving as many as 470,000 visitors annually—and operating 16 hours a day—we’re confident we made the right choice with Vanguard.”