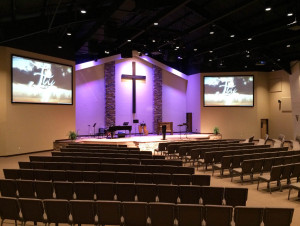 Twenty years after its founding by a handful of dedicated families, Redeemer Church celebrated the completion of a brand new 16,000-plus square-foot sanctuary, fellowship hall, and classroom complex in its hometown of Riverview, Florida, a suburb of Tampa. Midway through the design phase, local A/V integration firm Christian Sound Installation (CSI) picked the project up when another firm folded, taking the best elements of the existing work and tweaking it for increased integration, impact, and functionality. Based on past success and a proven record of reliability, CSI specified Ashly Audio network-ready processors and amplifiers, which, together with an Ashly WR-5 remote control, gives the church reliability, great sound quality, and the ability to conduct full, audio-engineered services or smaller, auto-mixed events, such as weddings or funerals.

Garner specified three Ashly nXe1.52 dual-channel 1,500W network amplifiers, each of which uses its network-ready feature to reside on a private amplifier network. “Having the amps on the network makes it simple and convenient to power up and down from front-of-house,” said Garner. “But more importantly, it gives the operator an immediate overview of system performance. They can watch temperatures, along with the input and output levels. That greatly simplifies troubleshooting, heads off problems before they become catastrophes, and generally promotes confidence in the system’s performance.”

CSI installed Electro-Voice EVH horn-loaded loudspeakers for the mains, but ran into a snag with regard to low-end support. Because the sanctuary is inside a pre-fab metal building, weight constraints forced Garner to find a very efficient low-end solution. “The Danley TH-118 has a tremendous amount of high-fidelity output for its size,” he said. “We were able to complement the EVH’s with just a single TH-118 flown above the center of the stage. It’s so efficient, they actually asked us to turn it down a bit from the level we set at commissioning!”

He continued, “All in all, it’s a great system because it has a great signal path that plays well together from start to finish: Shure mics, an Allen & Heath console, Ashly processing and amplification, Electro-Voice loudspeakers, and a Danley sub. No weak links there! In addition to Ashly’s great sound quality – which is hugely important – Ashly also has a proven record of reliability. And that’s ultimately just as important to a successful installation. Redeemer will enjoy continuous, day-in, day-out operation for years and years.”