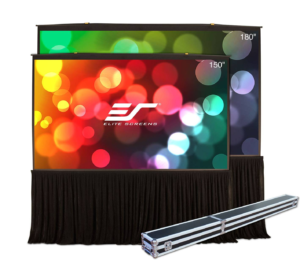 Sun City Church is a church plant in Spokane, Washington that started in January 2015. After being in our fi rst mobile location for a few months, we needed to move for more space. We looked all around our city and eventually landed in a local High School. While we were really excited about the idea of moving our Church into a high school, it did come with it’s challenges, and one of those challenges was our media display. At the previous location, we used a screen that was provided and already setup for us; so setup for our projection was really simple. Knowing that in the new location we were going to be under a time crunch for setup, it was really important to me that we found a fast, simple system for our media set up; two of them, as we needed a screen for each side of the stage. This meant that simplicity for screen set up was a must. Not knowing where to start, I scoured the internet. I had never purchased a screen before, so researching was a little overwhelming.

I found blow-up screens, full framed screens, large, small, hanging, standing, front projection, rear projection – so many different options! But none of them looked quick. Then, it happened, like the waters of the Red Sea parting, I found the screen I wanted: the QuickStand 5-Second Series from Elite Screens. The name alone captured my attention. The more I researched, the more I was convinced it was everything we wanted. I couldn’t believe that not only did I fi nd a solution for a high quality, quickly setup screen, but that it was all contained in punishment-ready aluminum road case, which is really heavy duty and durable (believe me, we have put that to the test). Not only does the case have wheels for quick mobility during set-up, a black drape kit is included to hide the bottom of the screen and casing and enhance the way it looks. The screen itself is freestanding, and opens using a dual cross spring mechanism which means our tech team doesn’t need to assemble anything; in other words, it really does take only fi ve seconds for the screen to go up. 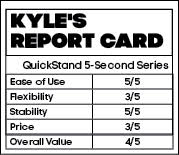 The screen material is a MaxWhite Fiberglass 1.1 Gain material, with black masking around the borders to enhance the picture contrast, and black backing to eliminate light penetration. It features a 180 degree wide diffusion viewing angle, and is also flame retardant. It all seemed to be to good to be true, but it was clearly the best possible option, so I pulled the trigger and purchased two. To be honest, I immediately felt buyers’ remorse because I just wasn’t sure if these screens would be a good enough quality for how were planning on using them. However, once they arrived, I felt like a genius! I’ve made a lot of purchases in starting this church. Some were winners, some… not so much. The QuickStand 5-Second Series from Elite Screens was by far one the best purchases we have made!