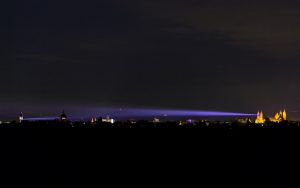 It has been 500 years since Martin Luther sparked the Reformation and the German city of Worms, which played a central role in the movement, has been marking the event throughout the year. From October 27th to November 1st, a spectacular “Ecumenical Bridge of Light” was cast between the city’s St. Peter’s Cathedral and the Luther Church using Elation Professional Proteus Hybrid™ moving heads.

Lighting designer Thomas Gerdon was contacted by the city to connect the lofty Catholic Cathedral with the Protestant Luther Church in a bridge of light intended to express the bond between Catholics and Protestants. “Even though they are separate religions, they are still connected by the Christian faith,” Gerdon says of the reason behind the project. “The bridge of light was meant to visualize this connection as a symbolic meeting of the two great faiths in partnership.”

Gerdon’s initial idea was to use traditional searchlights to form the bridge of light but because the fixtures would need to be installed high up in towers, fixture weight and size was an issue. “Besides the near impossibility of getting such large and heavy fixtures up there, there wasn’t much room to work in, and power distribution would have been an issue as well. That made it quite complicated.” Strong light output was a must however so Gerdon looked further, testing several large discharge lights. “But they didn’t have enough power, not enough punch,” he says. “So our first idea was too cumbersome and our second idea was not bright enough.” 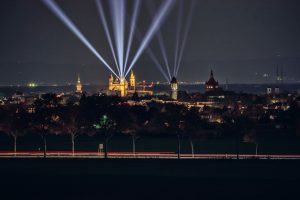 Proteus problem solver
Then Gerdon received a phone call from Marc Librecht, Sales Director at Elation Professional Europe. “He told me that the Proteus Hybrid was ready and asked me if I wanted to take a look, which naturally I did. Besides being 40% more powerful than some other lights we were looking at, it has all the benefits of IP65 so I took a fixture outside and pointed it up to the sky. It was amazing! It had just as much punch as a 2K searchlight but at 10% of the power draw and a fraction of the weight! It solved all the problems I had.”

The award-winning Proteus Hybrid is not only powerful, IP65 and compact, it is loaded with features and is multi-functional with spot, beam or wash capability. Gerdon placed six of the fixtures in the tower of each church, 50 meters above the ground, and directed the light toward the opposing tower. The six fixtures are offset, three in the front row, three in the back, with all six aligned toward the other church. “When I first saw six of the fixtures in the Cathedral tower it was unbelievable how much power they delivered,” the LD said of the luminaire’s 23,000 lumen output. “We illuminated the Luther Church with beams from the Cathedral and vice versa, a distance of about 1200 meters. It created a spectacular, multi-colored bridge of light just as we had planned.” 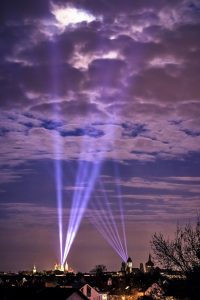 Accompanied by an opening event, the “Ecumenical Bridge of Light” was cast for the first time on October 27th. A series of joint events were held in each church during the six days up until the last show on November 1st. The light bridge illumination ran for 40 minutes with a light show of ballyhoo effects and color changes running for 20 minutes each hour. The light fixtures were on from 6:00 pm until midnight each evening. “We switched them on that first day and turned them off on the last day and had no issues. They were exposed to weather – wind, rain, cold nights – and came through just fine,” Gerdon stated.

The Proteus fixtures were supplied for the project through Elation’s German distribution partner, LMP. “Marc Petzold and his team at LMP are always very helpful and supportive,” Gerdon said, adding that, “everyone at Elation was hands on and also very helpful.” Gerdon worked with local event- and media technology company Dawnconcepts on the project.

The light bridge project was well received by the citizens of Worms, not only as a connection between the denominations but also as a beautiful composition of light and sky in the urban environment.