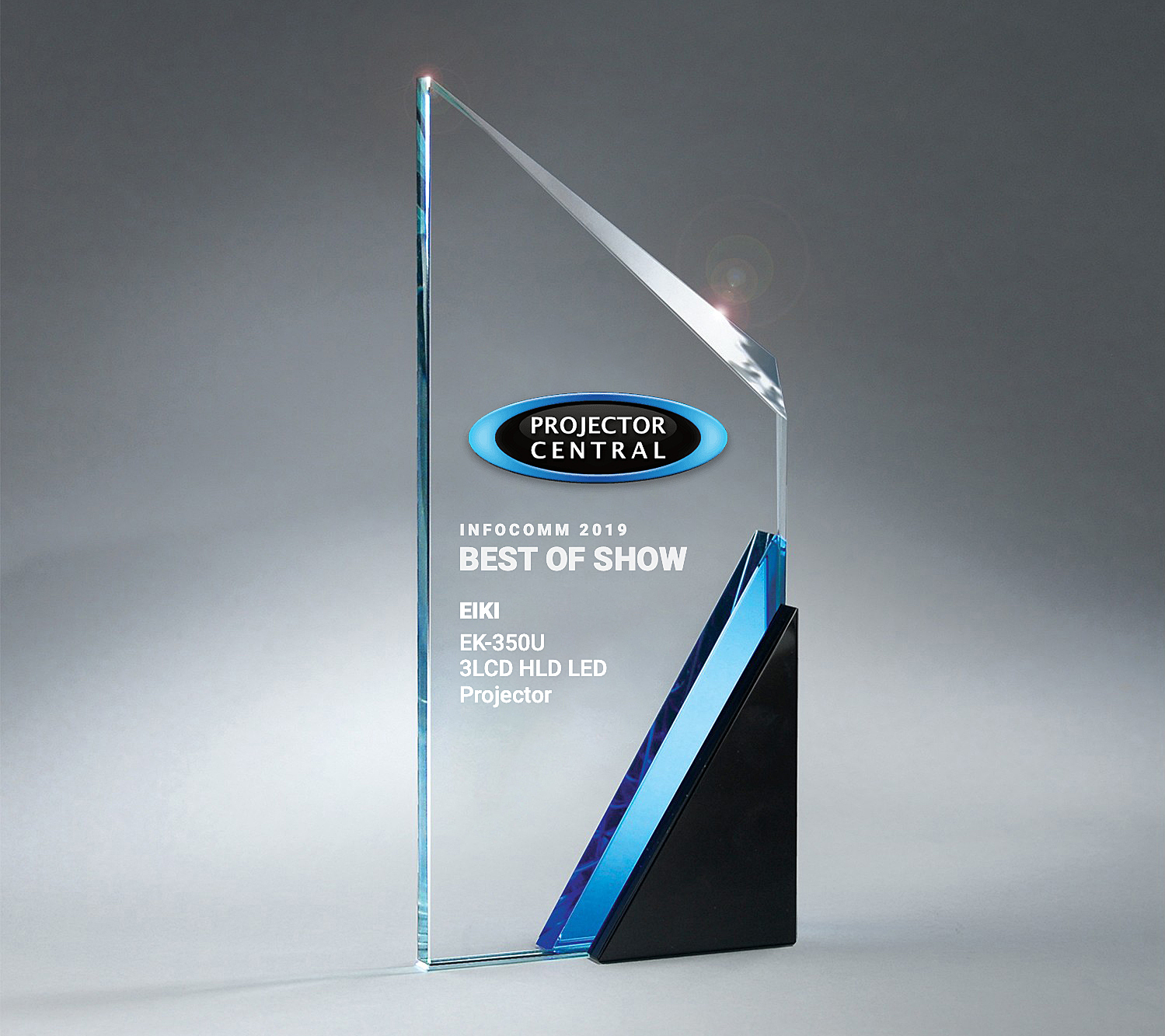 Rancho Santa Margarita, CA – June 2019…Eiki International, Inc. a world leader for over 40 years in projection technology, is pleased to announce that the company’s EK-350U 3LCD Projector with HLD LED technology is the recipient of ProjectorCentral’s prestigious InfoComm 2019 Best of Show Award. Offering 4500 ANSI Lumens brightness and WUXGA resolution, as well as 3 LCD design for excellent image quality and reliability, the EK-350U’s ColorSpark HLD LED projection system lets those in the room see everything that’s on the screen in sharp definition with vibrant, clear colors.

ProjectorCentral cited several important distinctions that resulted in its decision to award the Eiki EK-350U its Best of Show honor. These considerations include: (1) notable achievement in performance specs, (2) innovative or unusual technical design features that benefit usability, flexibility or efficiency of set-up, or ongoing maintenance needs, (3) advantages in size, form factor or visual design, and (4) unusual value at the product’s assigned introductory street price.

Eiki was the first company in North America to ship a projector with ColorSpark HLD LED LCD technology. Because the EK-350U’s HLD LED technology emits four times the light of many other projectors’ LED technology, the result is stunning visuals, with the screen appearing as much as three times brighter while retaining brilliant color performance. An additional benefit of the projector’s integrated HLD LED technology is its rapid power on and off capability.

Rob Sabin, ProjectorCentral’s Editor-in-Chief, commented on the Eiki EK-350U’s recognition, “The low-maintenance and cost benefits of solid-state laser and LED light sources are widely recognized, but as the demand for more lumens has climbed, LEDs have been left out of the party due to traditionally low brightness and concerns about color quality. By utilizing the cutting-edge Philips HLD LED technology combined with 3-chip LCD imaging, EIKI’s EK-350U is able to offer up a punchy 4,500 lumens with good color and a 25,000-hour lifespan in a surprisingly compact and cost-effective package. Along with its even brighter sister model, the 5,500 lumen EK-355U, it represents a glimpse of what the next generation of LED could mean to the projector industry.”

Steve Rubery, CTS, Eiki’s General Manager for Sales & Marketing, shared his enthusiasm for ProjectorCentral’s award, “Everyone at Eiki is excited about the HLD LED LCD technology, which we have been selling for 2 years now. The fact that we have finally received such notable recognition as “Best in Show” at InfoComm by ProjectorCentral just proves that all the hard work is finally paying off. Our customers will be able to get cutting edge performance at the most reasonable prices with this technology.”

The Eiki EK-350U 3LCD Projector with HLD LED technology was introduced in February 2018. The projector carries an MSRP of $4,995.