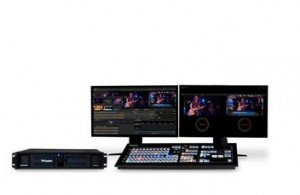 First off, for anyone unfamiliar with the Newtek TriCaster, please check out the online review of the TriCaster 855 to get some background on the system.

Slimmer than the TriCaster 855 by half, the 455 takes up only two rack units (3.5 inches of vertical rack space). Yet it has capabilities that rival the 855 in many ways.

The TriCaster 455 comes loaded with virtual sets and 3D visual effects, the same that you’d find in the 855, and includes 24 virtual sets to get started. In addition, the 455 has four internal camera inputs, with each input capable of high or standard-definition SDI, or a variety of analog options, including composite, component and Y/C. Four virtual inputs are also available, providing the ability to ingest AirPlay-equipped content from an iPad, iPhone, iPod touch or newer MacBook Pro laptops. All in all, the 455 provides 14 channels of video input.

The only area we see the 455 lacking against the 855 is the limitation of audio inputs and outputs. While there is one stereo pair of balanced XLR inputs and three balanced pairs of unbalanced inputs (one stereo pair for each internal video input), this limited number of audio inputs means that most scenarios will rely on an outboard audio mixer. Still, in saving two rack units of space, the 455 should fit into a fly-away pack—along with a small outboard mixer—in the same space as the TriCaster 855, but at about half the weight.

For our review, we enlisted the help of a fellow video producer.

Kyle Long, owner of Digital Fridge, has done a number of projects for houses of worship as well as civic organizations. We asked Long to compare his use of the TriCaster 455 to an older TriCaster he’s used on a project this summer, especially when it came to streaming usage.

“I had the opportunity to partner with my local Chamber of Commerce,” Long said of this summer’s project, “in order to stream live video of a national softball tournament. I used a TriCaster BROADCAST, an older SD-only model, as the backbone for the video streaming.”

Long said one of the challenges he faced with the older TriCaster was that it didn’t include the one-button click Livestream settings or the H.264 codec. This issue has been eliminated with the TriCaster 455.

“After setting up the TriCaster BROADCAST with a Sony BRCZ700 PTZ camera to cover the field, as well as a GoPro Hero located behind home plate, I realized that the BROADCAST model is not capable of streaming the h.264 codec needed for mobile devices directly to livestream.com.”

Long was looking for a solution that would be both more elegant and more robust. I asked him to apply his scenario against the capabilities of the TriCaster 455.

When Long took a look at the 455, it solved several problems for him.

“I was able to test out the TriCaster 455 with the external control surface in my office this week,” said Long. “I was anxious to explore the integrated live web streaming and the possibility of using the multi-track isolated recording for future projects.”

The 455 uses a control interface that’s much larger than the LC-11, even though LC-11’s surface can also be used for the 455 thanks to the ALT key that allows its buttons to function on two levels. Long liked the new control surface, although he said for field productions using a fly-away pack, the smaller LC-11 would probably be a better choice.

“While the TriCaster 455 has a sleek design made to fit in a rack mount,” said Long, “the external controller is somewhat bulky, measuring 23.5 inches by 11.5 inches. The bulkiness of the controller prevents it from fitting in standard size 19.5-inch rack.”

As a result, Long gravitated towards the on-screen user interface, and was pleasantly surprised at how familiar it looked.

“The on-screen interface of the 455 is similar to the earlier BROADCAST model, despite more buttons for inputs and a row of buttons for utility,” said Long. “One noticeable difference is the streaming button that opens up a dropdown menu with most of the popular web streaming services such as Livestream, Brightcove, Justin TV, and Akamai just to name a few.”

Given Long’s earlier ordeal with the Livestream mobile-and-desktop streaming, he chose to focus on whether the 455 would solve his previous problem.

To see whether he could simultaneously view content on a laptop and a mobile handset, Long chose to connect three cameras—a Panasonic HVX200, a Sony HDR-FX1 and a GoPro Hero camera—into the 455.

“I selected the HD + Medium + Mobile option for Livestream.com,” said Long, noting it was a single button choice from the pull-down menu. “I was impressed with the results of the video stream after viewing it online full screen and on my iPhone.”

Impressed by the quality, Long then wanted to see what would happen if he chose to add isolated recording for each of the cameras.

“I then wanted to experiment with the multi-channel isolated camera recording,” said Long, speaking of the TriCaster’s ISOcorder capability. “By clicking on the record setup button you have the option of selecting what inputs you would like to record and can set the file destination.”

“In addition,” he said, “there is drop down menu with the following encoding options for the recording: QuickTime, MPEG-2 Compatibility, MPEG-2 High Profile, AVI, H.264 High or web quality, and MP3 audio only. Once a video is recorded it can then be played back by using the DDR.”

Long added that the ISOcorder has a nice option that adjusts the playback speed of the recorded clip from 25% to 400%.

“Although I only scratched the service of what the 455 has to offer during my test drive I walked away impressed,” said Long.