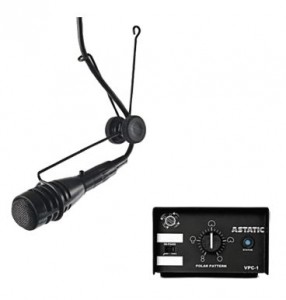 For all the technical prowess imbedded in the contemporary church environment, there remains an unmet challenge: how to mic area vocal ensembles. Whether the group is a stalwart traditional choir or a contemporary praise ensemble, the throngs of a mass gospel choir or simply a dozen children singing, delivering their energy to the audience is difficult at best and seemingly impossible at worst. While several companies have introduced improved choir mic systems, each remains a variant of its underachieving predecessors.

Astatic, however, recently unveiled a new approach to the old problem with their 1600VP continuously variable pattern condenser mic system with remote polar control and anti-rotational positioning mount.
A hanging choir mic is not a new concept; one that adjusts to the environment and remains stable, however, is. Prior to the invasion of the platform by rock bands, choir lofts were a relatively sedate place, disrupted only by the sound of a single flown monitor for track playback and the distant notes of the piano and organ. Once praise bands appeared, though, the platform volume increased exponentially and the choir was quickly buried by drums, guitar amps and vocal monitors. Most attempts to raise the level of the choir were met with instant feedback as the laws of physics made their presence known. For sound system designers, selecting the correct polar pattern of the hanging choir mics and keeping them in position became a rite of passage to superhero status since anyone who could coax voices out of the raging on-stage noise was surely capable of human-powered flight and a four-minute mile. Several microphones were introduced with polar variants available as a preselected sub-model, but challenges arose once the choir moved or a new orchestra pit was built.

The Astatic 1600VP addresses all the issues worship techs confront in ensemble micing. Its innovative polar adjustment goes beyond previous solutions with their cardioid to super to hyper modes by granting the user all the nuanced patterns between these fixed points. Thus, if the need calls for a 113 degree acceptance angle, it is available and, here is a key feature, without calling in the mounted cavalry with their twenty-six foot extension ladders. Thanks to a remarkable remote control system, a small box resides at FOH position, replete with a salient knob whose function is to change at a whim the polar pattern anywhere from omni to figure-eight. In most instances, such power would require a separate control line run, but the engineering team at Astatic developed a method of sending control information atop a standard twisted-pair-and-shield mic cable run. Thus, no special wiring is necessary. With a useable range of two-thousand feet, the 1600VP can tame the choir response in the largest mega-church but its interface is simple enough for the lay person in the smallest rural congregation to master instantly.

Traditional hanging small condenser choir mics typically exhibit susceptibility to RF interference due to their inherent nature as unbalanced transducers for roughly thirty feet until the signal reaches the inline preamp. In contrast, the 1600VP meets the latest European Union’s RF standards for immunity. An additional issue in hanging mic applications is the tendency of lightweight mic elements to twist over time, making proper orientation impossible. The Astatic sports a unique anti-rotational steel positioning mount to keep the mic pointed in the right direction. Included in the package is a spool of black thread for positioning the hang, an articulating steel hanger rod and a single-gang stainless-steel wall plate with upper support, meaning the 1600VP will install easily into almost any church environment. Finally, the rack-mountable (six per space) remote box offers a switchable second-order 80Hz HPF to improve the mic’s response to the sung word and a de-rigueur blue LED indicator which glows when things are properly connected.

So, the 1600VP has all the improvements and best practices covered, but how does it sound and can it get your choir heard over the surrounding sonic din? To answer these questions, the 1600VP was placed on-stage in a contemporary praise setting populated with three electric guitars with amps, bass, acoustic drums helmed by Animal from the Muppets, two keys players, percussion, acoustic guitar (with amp, of course), five vocalists with four monitors and an assortment of noisy hazer machines and moving head luminaries. The 1600VP was placed alongside an old-school Shure SM-81 choir mic, an AKG C-3000 large element condenser and a standard Audio Technica U853AU hanging condenser. The ensemble consisted of twenty-three voices, reasonably well-trained and capable of decent projection. The result was impressive, as the 1600VP proved the sonic equal of its counterparts and shone through with its ability to alter the polar response to compensate for nearby intrusive signals while retaining as much acceptance of the voices as possible. For example, when placed on stage-right near the drums, dialing the pattern tighter eliminated most of the cymbal impact in the choir channel without resorting to cutting the treble response on the board EQ. Moving the mic to center position on the choir allowed the variable pattern control to be widened enough to mute one of the adjacent mics and increase the signal-to-noise ratio. Finally, moving the 1600VP upstream within the choir made it possible to catch most of the voices from a single source by dialing in the figure eight pattern and orienting the element sideways. Thanks to the optional MB-1 mini-boom, the 1600VP can be stand mounted for ground support applications in place of its standard role as a flown ceiling mic. In the floor mounted situation in the midst of the choir, the result was clear vocals rising over the surrounding instruments, all from a single mic with a remarkably small footprint.