Our church is called Faith Tabernacle and we are located in Wilmington CA. just 20 miles South of Los Angeles. We are a small non-denominational church with under 100 members. We typically run one service on Sunday morning and occasionally host community events. Faith Tabernacle was founded in 1944 by Rev. E.E. Pattrage. Rev. Pattrage worked with neighborhood kids in baseball and basketball, and was a gentle man with a heart for Jesus. When he was confronted by his contemporaries for using unorthodox methods for reaching the lost (basketball and baseball leagues), his humble reply was, “I have done what I could.” Currently under the guidance of Pastor Ron Roark, Faith Tabernacle continues to follow this tradition of doing all we can do to reach those that are lost.

We had been using the original Presonus Studiolive 24.4.2 digital mixer since it was first released several years ago, but we were starting to add a lot of new equipment and we were beginning to run out of channels. When we saw the StudioLive 32 Series III console, we thought that it was a great time to upgrade.

When the original StudioLive console first came out, it was a game changer for small churches like ours. We have a small church of just under 100 people and before the StudioLive came on the scene, digital mixers were something we could only dream about being able to afford. With the new Series 3 mixers we are happy to see that Presonus is still thinking of ways to enhance this product line while continuing to keep them at an affordable price.

With a digital console, every single channel has everything you could possibly need built right in. You have a compressor, EQ and limiter on every channel which allows you to really dial in everything you are sending to the mixer. In addition to these features, there is also a large host of built in effects such as reverb, delay, and chorus. If you were using an analog mixer, you would have to spend thousands and thousands of dollars to purchase all of the components separately that are already included with a digital mixer.

On the original StudioLive 24, PreSonus did a good job allowing us to recall our presets even though they did not have motorized faders, but since the gains were unable to be recalled, we would have to take pictures of the gain knobs on the board so that we could set them back to where we had them the previous week. Now with the new Series 3 mixer, the motorized faders and recallable gains allow us to recall our settings 100% with just the push of a button. In addition to these improvements, PreSonus also added new EQ’s, Compressors, and Effects that model the look and sound of real-life hardware components. I really like these because they give me the ability to mix more organically instead of just staring at graphs and numbers. Every control on the board can also be controlled though an iPad, giving the engineer the freedom to walk around the room and make sure the sound is great no matter where you are seated. This ability was present on previous models as well, but Presonus has recently overhauled their remote control apps and they seem to have a much more intuitive UI when compared to the apps available for the original StudioLive mixer.

The general sound of this board is incredible and is an improvement over the sound of the original StudioLive 24. The preamps that PreSonus has placed in the new Series 3 mixers are very clean, and there is virtually no noise to speak of even when running at high volumes. The StudioLive has several Parametric and Graphic EQs that make it very easy to tune your system and remove any unwanted frequencies from the mix.

Our worship band has about six members we and running worship at a volume of 90-95 decibels on average. The sound is very contemporary – think Hill Song United and Jesus Culture. With the loud “rock and roll” style of our worship, it’s very important our mix is tight. We try and offer a fully immersive experience during Sunday morning worship; our worship is meant to totally engage the mind, body and spirit. Having a great mix is important to accomplishing this goal. While there are different ways of sharing the word and worship with everyone; our church caters to the contemporary crowd that is looking for a less traditional style of worship.

On our new mixer we are currently using about 28 of the 32 channels available. In addition to our vocalist and instruments, we are using other inputs for running room mics, backing tracks, and we have tracks dedicated to sending in audio to our IEMs for practicing along with pre-recorded tracks before service.

Since we were already familiar with our original PreSonus StudioLive, it was very easy for us to adjust to the new board, but PreSonus did a great job making the user interface user-friendly and intuitive and volunteers with little-to-no experience can pick up the basics of learning the board in no time. Where some of the other digital mixing consoles out there would require taking a college course to understand, the StudioLive is very easy to learn.

Prior to purchasing the board, we had already installed a larger snake in anticipation of future needs, so very little additional cabling was needed. However, for a church that hasn’t planned ahead, a larger snake may be needed to accommodate the extra channels.

We have also just begun to broadcast our services live online and the StudioLive Series 3 makes it very easy to setup a broadcast mix that is separate from the regular FOH mix. This broadcast mix is able to be controlled by a second engineer via an iPad without effecting what’s going on in the house. This is a pretty big deal because normally it would take having two separate sound boards and a split snake in order to have two separate mixes but with the StudioLive, you have the ability to have over 8 separate stereo mixes or over 16 separate mono mixes to run in any way you see fit. 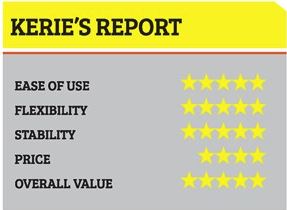 The 16 Auxiliary outputs on the Presonus StudioLive Series 3 can be set up in multiple ways but one of the new ways they can be configured is as a matrix mix. A matrix mix is basically a mix of mixes and this allows for some really neat possibilities. For example, we can mirror the front of house mix and just boost the volume of the drums for our broadcast mix without having to create a second mix from scratch. Mixing in this way makes it really easy to set up multiple mixes for cry rooms and overflow rooms.

The Presonus StudioLive Series 3 mixer provides a great value and tremendous flexibility for small to medium churches. The sound quality and features are unrivalled by anything else in its’ price range. If you are looking to upgrade to a digital mixer, I would highly recommend that you consider this board.

KERIE ROARK HAS BEEN AT FAITH TABERNACLE FOR 23 YEARS. HE PLAYS THE BASS FOR THE CHURCH WORSHIP TEAM, AND ALSO ACT AS THE CHURCH’S MULTIMEDIA DIRECTOR