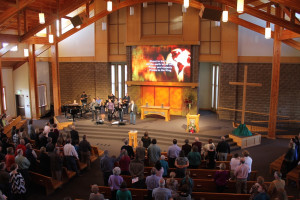 Hope Lutheran Church began its ministry on the north side of Fargo, North Dakota’s largest city, back in 1958. Since then, the church has succeeded in carrying its message to a diverse set of people from all walks of life, and now hosts approximately 2,600 congregants per week. Recently, Minneapolis, MN—based Excel AV Group (www.excelavgroup.com) assisted the church in completing a multi-faceted A/V installation in the 1,200 capacity sanctuary of its South campus, featuring state of the art amplification from audio manufacturer Powersoft.

The new AV system, which is part of a broader construction upgrade that was completed in mid-October, is a significant upgrade to the facility’s previous system, which was aging and no longer able to fulfil the church’s innovative programming requirements. When the original system was acquired in the early nineties, content consisted primarily of organ, choir and spoken word. Now, as the church pursues a more contemporary programming path, music can range from traditional to more progressive — therefore the system must now accommodate increased SPL and frequency range.

The new installation not only needed to ensure that everyone could hear the pastor clearly, but also had to support dramatic performances, video content as well as live modern music performances. “The old system did not have enough SPL output, the audio quality was poor, and the coverage was spotty throughout the sanctuary. They needed a system that could deliver even coverage to all seating locations — not just in terms of SPL, but also tonality, which is more difficult.” explained Caleb Dick, System Designer, Excel AV Group.

The church wanted this project to involve top manufacturers, so the system is based around Powersoft for the amplifiers, Danley for the speakers, Midas for the mixing console and Sennheiser for the wireless system. Powersoft amplifiers were chosen for their outstanding sound quality, low current draw and their ability to deliver the high power requirements of the system. Following a thorough acoustic assessment, it was concluded that the main speakers required 2,800 watts at 8 ohms. “That is a lot of power, and it narrowed the options down among the choice of manufacturers. We ended up selecting the Powersoft Duecanali since we wanted to use the best technology available at the time.” Excel was able to have the whole system sequenced and running off of multiple 20-amp circuits. “We didn’t have to change to 240 volts and this made it very simple. The current draw was very low overall thanks to the efficiency of the Powersoft amplifiers.” Caleb explains.

Since a good part of the sanctuary’s interior is composed of hardwood, the room already had pleasing acoustics. To retain its inherent ‘live feel’ without energizing the ceiling and wall, speakers with excellent pattern control were used to avoid extraneous reflections. Excel cites the precise pattern control of the Danley loudspeakers as an important factor in achieving a favorable acoustic response, and also controlling gain before feedback issues. Speakers were hung from large beams spanning the entire width of the sanctuary, and subsequently angled in various positions to ensure audio coverage for virtually every seat in the facility.

The system design consisted exploded mono with three different zones: a floor zone for the main speakers, a balcony consisting of three speakers (and also where FOH was located), and under the balcony, which required six speakers given its short ceiling height and deep seating area. All of these speakers were time aligned to the main system; one of Excel’s primary goals was able to ensure single time arrival for every seat in each zone — including the FOH position in the balcony, which they ultimately achieved.

The church needed the system to reach 103 dBA with 15 dB of headroom.  Based on the system design, as well as the SPL plots and modelling software analysis, Excel knew the intelligibility of the system was going to be extremely high because they had one time arrival everywhere. Thanks in large part to the Powersoft K10 DSP and damping factor compensation, the bass extension was almost 30 Hz and the SPL for low frequencies was higher than the church will ever use. In a nutshell, every single one of both Excel’s and the church’s goals was met.

According to everyone at Excel, choosing the right amplifier choice can play a determining factor in delivering a premium audio experience, as in this case: Excel has used Powersoft a number of times over the last five years.  When it comes to sound quality, there is something about how Powersoft amps can deliver high levels of power really fast. For example, the subwoofer impact is consistently hard, even if the electrical service into the amp fades a bit. On the other speakers, the response from the mids and the highs are really accurate as well. The Powersoft amps produce an authentic, present sound. “It doesn’t feel like you are rounding off the transients like some older amps.”

The installation, which began in early July 2014 and completed by month’s end, was a rousing success. The church loves it, it was a significant upgrade and everyone is very pleased. From a technical perspective, Excel had high expectations from the start and knew everything would come out right, as they had a lot of experience with Powersoft and everything performed extremely well.