Congregants praise new loudspeaker solution for its impact and intelligibility 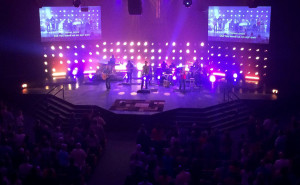 In today’s high-technology climate, the challenge facing many dynamic Houses of Worship is to maintain congregation engagement. At Tucson’s Pantano Christian Church (PCC), half of weekend services feature modern Christian rock, yet worshipers were regularly voicing they couldn’t properly hear the music or the message.

Nearly two years ago, when a new pastoral team stepped into leadership at PCC, they declared an upgrade to the worship spaces’ audio, video and lighting systems a top priority, and HOW systems integrator CCI Solutions was called in to specify and install an L-Acoustics ARCS “WIFO” (WIDE/FOCUS) loudspeaker system.

Todd Gathany, CCI’s senior systems consultant on the Pantano project, faced a difficult obstacle: the worship space actually consists of three distinct spaces. The main sanctuary has adjoining gymnasiums with their own bleachers in the back on both sides – with floating air walls separating them from the big room. The walls are moved to the sides for major events, opening the facility to a capacity of 2,000. Gathany notes, “The new PA that we designed had to work for all three spaces individually, but then had to easily come together to cover the entire space as one in a very cohesive way so the experience would be similar regardless of what room you’re in.”

“The room is odd,” admits Philip Cain, Pantano’s tech director. “A traditional left-right wide array wouldn’t have worked. In fact, we had another integrator spec it a few years ago, and they realized it wouldn’t work. Yet we definitely needed a marked improvement. We were getting frequent complaints that it was ‘too loud,’ ‘it doesn’t sound good’ or ‘I can’t hear in this spot.’ It got to the point that we were losing some people. We were pushing the envelope on how modern our services were getting, but the sound quality wasn’t keeping up.”

CCI met with PCC’s staff for design programming the week of Thanksgiving 2013, and installed everything – all audio, video and lighting systems – in time for Easter 2014. The installation called for six L-Acoustics ARCS FOCUS and eleven ARCS WIDE constant curvature array enclosures, ten SB18m subs, six 5XT coaxials, and seven LA4X amplified controllers, which are all fed by a new Yamaha CL5 console. They can split the sound system as separate rooms, “but then when you hit the ‘all is one’ button, all three room PAs can also work in unison,” says Gathany. “Each room sounds really good individually, but collectively, it’s amazing how cohesive the experience is, audio-wise.”

“Since we put in the L-Acoustics system, we get consistent, even coverage everywhere with clarity and definition of sound on both the high and the low ends,” says Cain. “It’s seamless when you walk from the top of the bleachers of the extended rooms all the way down to the front row, just in front of the stage. The L-Acoustics ARCS WIFO solution was just about the best thing that could happen in this room.”

“The sound quality has increased tremendously with the new system,” comments Steven Moore, PCC’s audio engineer. “There are no worries if it’s going to be loud from FOH, and also for the bands on stage.”

Cain cites another example of how the upgrade has paid off for the church. The audio team previously had to put up an acrylic cage around the drums because they were so loud. “Once we put the L-Acoustics system in, we were able to get the sound out in the house and take the panels off the drum kit,” he says, noting that the sound is typically at 100 dB, which he calls “church concert levels.”

The difference that the new equipment brings also became obvious very quickly to Paul Taylor, PCC’s worship and environments pastor. “I was recently talking with one of our guests after a Sunday morning service and he was very quick to let me know that this was his first time in a church service in years. He had been invited by his mother, who attends regularly, to take in a service with his family. Once the service was over, and we connected, he couldn’t stop talking about how professional things seemed to him. He was blown away by the quality of sound our system was producing, as well as the excellence of how our musicians played. His exact words were, ‘Man, it sounds like a concert in here.’ While the concert in and of itself is not what we’re after, he related our quality of audio with that of other high-end venues that produce not only audio, but a memorable experience, which is what we strive to provide.”

For details on CCI’s services, log on to www.ccisolutions.com.