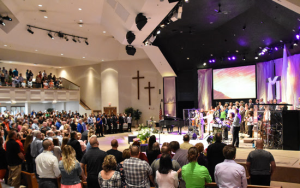 From a bible study group started in 1936, Old North Church has grown to over 1,300 members and attendees. The Church’s modern new building includes a 1,000-seat sanctuary, a library, classrooms, and a family life center (gymnasium).

Executive Pastor Chris Drombetta says the church’s worship gatherings prioritize Biblical preaching and teaching, supported by music, and a blend of traditional and modern expressions of the gospel. Many of these expressions utilize new dynamic technologies, such as the recently installed loudspeaker system.

Drombetta emphasized “the message must be crystal clear.” Yet, the church sanctuary has multiple reflecting surfaces and the church’s original loudspeaker system was forty feet in the air. Thus, despite the addition of front-fill and delayed loudspeakers above the balcony, it was difficult to hear and understand the spoken and sung word in many parts of the sanctuary.

A pair of Community dSPEC226AN DSP processors provide loudspeaker management, delay and equalization. Williams reused the church’s existing under-balcony loudspeakers but says the full-range performance of the I SERIES allowed him to turn off the existing subwoofers. The church retained its Soundcraft digital mixer and Sennheiser wireless microphones along with its Aviom personal monitoring system and stage monitor loudspeakers.

Despite a tight installation schedule, CIS Ohio completed the installation in time for Old North Church’s 2016 Palm Sunday, Good Friday and Easter services. Pastor Drombetta said the system is “right on target” for achieving the church’s goals for even coverage and speech clarity and Williams reports that a church member commented, “This was the first time we could hear in the church.”