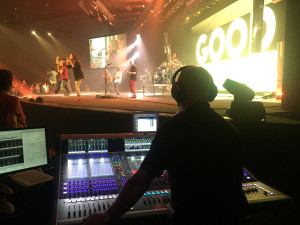 With four campuses in Michigan and over 20,000 weekly attendees, NorthRidge Church—in the Detroit suburbs of Plymouth and Saline, and the cities of Grosse Ile and Brighton—now ranks as one of the 30 largest churches in the US. To best accommodate the remarkable growth and support its increasingly sophisticated worship services, pageants, concerts and other events, the church’s flagship location in Plymouth recently purchased two DiGiCo SD7 consoles. Sold through REACH Communications of Champlin, Minnesota, the two new desks replace three DiGiCo CS-D5 consoles that had been in place there for eight years.

The SD7s, which are used to mix front of house and monitors, were installed in the church’s 3,000-seat main auditorium in time to support this year’s Easter musical and worship events. According to NorthRidge Church Audio Director Mike Duff, the desks are ideal for major productions like this, as well as the church’s annual “Glory of Christmas” event, which features a full orchestra and choir. “We needed a higher channel count, for starters,” says Duff. “But we also wanted to continue to enjoy DiGiCo’s workflow, which we really began to appreciate while using the CS-D5 consoles.”

Duff says one immediate advantage of the upgrade to SD7 is the redundant engine: “Redundancy is critical during any service, and the SD7 gives us confidence in a single console, along with a lot of other improvements.”

Those include three user-friendly interactive 15-inch high-resolution touch screens, each of which accommodates a bank of 12 faders; high-definition interactive meter bridges and multicolored knobs and switches for easy customization of the work surface; and 16 assignable faders (one bank of 12, one bank of four) that sit neatly below the master screen in the center of the console and bring the SD7’s fader tally to a sizeable 52. Furthermore, the SD7’s local I/O includes 12 analog inputs, 12 analog outputs and 12 AES I/O (mono), with four redundant MADI ports per engine, and one Optocore loop with the ability for an option for a second to be fitted. This amounts to a monumental 1,392 I/O connections on a single optic loop with one work surface.

The DiGiCo SD7s seemed to have been destined to join NorthRidge Church. It was the preferred choice of both Duff and monitor mixer Mark Waldbauer to replace the existing CS-D5 desks, but Duff wasn’t sure the church’s budget would accommodate them. However, NorthRidge Church Creative Arts Director

“It was the top of everyone’s list,” says Duff, who was pleasantly surprised by the news, along with NorthRidge Technical Director Jason Horn, who ultimately chose REACH as the vendor for the desks. “She said, ‘Why wouldn’t we go with the best?’” Now, Duff and Waldbauer enjoy the benefits of the SD7s’ workflow, work surfaces and features they couldn’t find on any other brand of console. And the original DiGiCo CS-D5 consoles still have homes at NorthRidge Church—in the main campus’ activity center and at the church’s Grosse Ile campus.

“DiGiCo’s workflow has been a huge advantage for us,” adds Duff. “It’s something we want to have everywhere we can.”