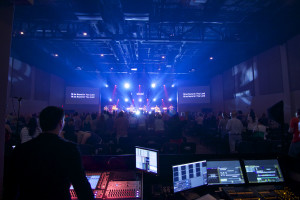 NORTHchurch, a non-denominational contemporary church that uses the latest technology and media to communicate its message, recently installed a DiGiCo SD8 console and a pair of SD-Mini Racks interconnected by an Optocore fiber optic network. The front–of-house console system was part of a major audio system redesign at the church’s two-story location in a northern suburb of Oklahoma City together with an L-Acoustics loudspeaker system, acoustic treatment and other improvements, all provided by Skylark AV, a local audio, video and lighting equipment design, build and installation company.

“It was important to stay within the budget but also get something that is going to be reliable, move us forward, and that would be easy to grasp for our volunteers,” explains NORTHchurch’s production director, Stephen Kramer. “We are a growing church and are also considering adding a broadcast console and a monitor mixing console in the future. Looking into DiGiCo, we felt that we would have all the opportunity in the world to grow and add functions, and that it would give us everything we wanted.”

Having been working on a smaller, less powerful digital mixer at the church previously, Kramer reports that he had to relearn mixing and learn new terminology once the SD8 was installed. “It was a new world to learn about ‘recall’ and ‘update,’ ‘session’ and ‘snapshot.’ The snapshots have been a game-changer. It has allowed our volunteers to come in and easily set it up, and for us to have a very consistent sound across all of our experiences.”

Those experiences—there is a service on Thursday night plus three on Sunday morning—are managed by two separate audio teams. “We have an audio guy come in on Wednesday and Thursday. On Wednesday night, he does a soundcheck and gets a mix set with the snapshots. Another guy comes in on Sunday morning, can do a run-through with the band, and is able to reuse the snapshots that have already been built. So it has made it very easy for our volunteers.”

For example, he continues, “Our vocal effects are all snapshot based, and we have snapshots set up where our faders, mutes, and panning are being updated. When a volunteer comes in and hits Next, all of that is switching for them. They don’t have to assign effects or retype the tempo for the delay. It allows the mix engineers to be creative and flow and build dynamics, and not worry about the basic mix for the song.”

“They have absolutely fallen in love with virtual soundcheck,” comments Skylark AV’s Steele Beaty. “The complexity of the snapshot capabilities inside the DiGiCo has revolutionized how they do things. They are now taking the cues associated with the lighting and the immense control they have there and applying those principals to the audio console—and the DiGiCo lets them do that. With the aid of virtual soundcheck they are putting in the time to really hone each song and each transition like I’ve never seen a church do before.”

While doing his due diligence, Kramer compared the onboard effects processing capabilities of his top three console choices and ran the numbers. “We like to run our mix wet; we like a nice, thick, solid sound. But we would have had to spend almost the exact same amount of money to get the other options configured like the DiGiCo with its built-in effects. So we felt it was a no-brainer, and we are extremely happy with our choice.” 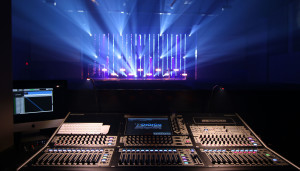 Kramer relied on Skylark AV for the PA speaker recommendation. “They ended up with the L-Acoustics ARCS II system—three per side, stereo hung—with four SB28s subwoofers in a central horizontal array below the stage, with six 8XTs for front fills,” says Beaty. The system is driven by one LA4 and three LA8 amplified controllers.

“I had never heard the rig before,” admits Kramer. “We have a very trusting relationship with Steele and the guys at Skylark. They’ve been part of our church for quite a while. They’ve come in and changed the way we view install companies. It’s been really important to us to have that relationship with them. We know that when they say something they either mean it or we can trust that they know what they’re talking about and they’re going to take care of us.”

Kramer is enjoying getting to grips with the new more powerful, more complex audio system. “With the combination of the DiGiCo and the L-Acoustics I literally had to relearn how to mix,” he says. “But we had a conference for students recently where we don’t get too concerned about the dB level and it was incredible—the clarity, even running at the higher volume, and the oomph from the SB28s underneath. It’s been a new lesson to learn.”

Looking to the future, says Beaty, “Their plans are to have a full-on video suite and green screen areas where they can shoot promo videos. The DiGiCo would have worked in its standard coax MADI form, but long-term, when you look at their vision, adding that fiber piece enables them to expand at will and however they need to. When they get their production spaces up and rolling we can add an SD-Rack in there, and they can do live audio mixing and get a finished product in about half the time.”

Skylark AV can likewise be found online at www.skylarkav.com.