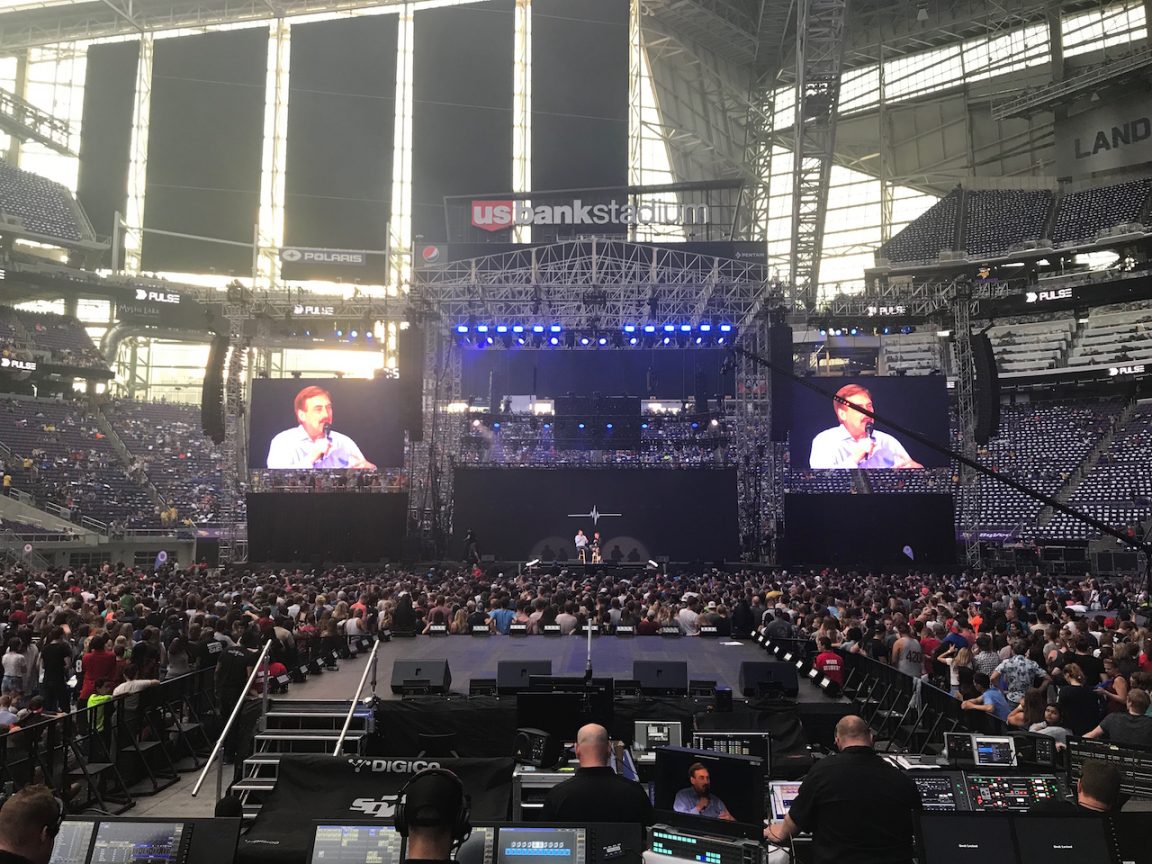 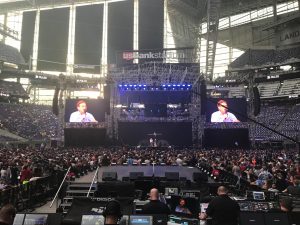 The NEXO STM Series, with a supplemental assist from the NEXO GEO S12, was used for a very large house-of-worship event in the US BANK Stadium in Minneapolis, USA with Reach Communications providing the 360° NEXO system. More than 50,000 people attended the free Pulse – Twin Cities show. Multiple headliners played the concert, including LeCrae, Hillsong, and Jaberwockies.

The recently built US BANK Stadium is already known for its challenging acoustics, but, as one of the largest venues in the region, it has played host to many world-class touring artists and engineers.

System deployment was in a 360° arrangement, with STM as Main, Out, Side and Delays, S12 as Rear, and M10 for front fills. Subs were a combination of flown and stacked STM S118, as well as cardio stacked NEXO RS18.

Dan Brown of Reach Communications, with on-site support from NEXO Engineering Support specialist, Val Gilbert, and Yamaha Commercial Audio’s Preston Gray, had to specify the STM system according to the load-bearing factors in the stadium. For main PA, the configuration use 15 STM M46/B112 main and bass sets per side, with side arrays of another 15 STM M46/B112.  Each of the hangs carried 2 STM M28 downfills.  8 STM S118 subs were flown per side, and on the ground were 12 RS18s (running in cardioid mode) and 8 STM S118s (Omni) per side.

2 hangs of 12 x GEO S12 cabinets were used for the rear of the stage, and the performance and coverage of these arrays was outstanding, leaving nothing to be desired in the overlap areas between these and the 270° hangs of 15 STM M28s per side.

The system was run entirely powered by 62 x NX4x4 amplifiers over Dante, with an analog backup. System control, EQ, and delays were matrixed from 1 LAKE LM26 and 3 x LM44.

“The system by far outperformed our expectations,” commented Gilbert. “No one felt the system was running out of headroom, and the engineers were globally satisfied. SPL reached 120dBA peak at front of house. Considering the extremely challenging acoustics of the venue, the overall sound was very good.”

Preston Gray from Yamaha Professional Audio was amazed by the consistency in coverage achieved with a relatively small number of cabinets in one of the largest NFL stadiums in the U.S. “This is a testament to the power and off-axis response of the NEXO STM Series, which hit 120dBA Peak & 131dBC Peak at front of house on a calibrated NTI XL2 meter,” states Gray.