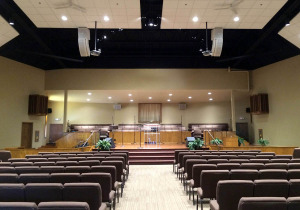 Founded in 1934 by a small collection of the faithful who opened up their living rooms every Sunday in the bustling Michigan town of Grand Rapids, New Hope Baptist Church has grown to a congregation of over 800 active members. To better accommodate its members, the church recently underwent a comprehensive renovation of its 750-seat sanctuary and associated overflow and ancillary use rooms. A new sound system centered on Ashly Audio processing, amplification, and user control is a centerpiece of the project and gives New Hope congregants exceptional intelligibility for spoken word, along with musical transcendence for the New Hope band and praise choir. Critically, the Ashly gear came in at a price point that allowed the church to meet its needs reliably, without breaking the project’s budget. Pro Audio Inc., of nearby Grandville, Michigan designed and installed the system for New Hope Baptist Church.

“The performance of Ashly gear is top-notch and yet its cost is very reasonable,” said Ken Reinecke, owner of Pro Audio Inc. “That’s a rare combination. In terms of sound quality, Ashly’s processing and amplification is transparent. What goes in is what comes out, plus whatever dynamics or equalization I’ve dialed in. And the gear can run at 96kHz for super critical situations. Programming Ashly’s Protea DSP platform is straightforward. I just drag and drop whatever processing I need, and drag appropriate inputs to appropriate outputs. Linking groups is also handy. Ashly gear is also tremendously reliable – it basically never breaks or fails.” Because space at New Hope Baptist Church was at a premium, it also helped that Reinecke could fit all of the system’s processing and amplification in just six rack spaces.

A new Soundcraft Si Performer 3 console serves as the user interface in the sanctuary itself. From there, an Ashly ne8800 8×8 Network DSP Protea™ Processor handles all of the loudspeaker settings for the sanctuary’s new JBL VRX928LA eight-inch, two-way line array system with JBL 915S subs. The stereo line array is powered by a single Ashly nXe 3.04 network four-channel amplifier rated at 3,000W per channel, providing ample power to the main sanctuary system. Additionally, output from the console feeds an Ashly Pema 8250 combination 8×8 Matrix Protea processor and eight-channel 250-Watt amplifier. The Pema 8250 takes additional inputs, such as wall jacks for microphones or music players that are located in the narthex and other out rooms. The versatile eight-channel Pema 8250 handles all of the audio routing, signal processing, and amplification for New Hope Baptist’s two nurseries, its nursing room, the bathrooms, and the narthex.

Four Ashly WR-5 programmable wall-mounted remote controls located strategically around the out rooms provide customized, intuitive control of those inputs, as well as of the sound from the sanctuary. “The nice thing about that arrangement is that folks can make changes in all those rooms without bothering the sound tech,” said Reinecke. “While the main system is controlled entirely from the Soundcraft console, the church staff can use the mic inputs and the Ashly WR-5 remote controls to play music or have a standalone PA for meetings and small events in those out rooms.”