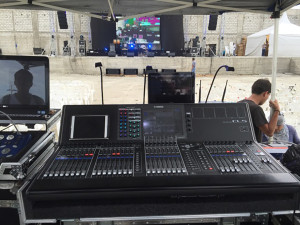 The Centro Evangelist Peninsular Assembly of God (CEPAD) in Salinas, Ecuador, South America, recently installed a new sound system consisting of NEXO and Yamaha products thanks to the efforts of Muzeek World of Orange County, CA.

“The demand for a quality and powerful audio system was the requirement by the church, and they requested a proven brand, so we recommended the NEXO GEO S12 line array system which was approved immediately,” states Sardari. The Yamaha CL console was chosen because of its scalability and network capabilities. Dante played a big role in the decision as well and the fact that Yamaha is the leader in the digital console world.”

With a seating capacity of 5,000 at the outdoor church, two services are conducted every Sunday. The services are both traditional and contemporary formats. For the contemporary services, the band consists of two keyboardists, electric and acoustic guitarists, drums, percussion, three main vocalists and 12 choral singers. There are over 7,000 congregation members.

The entire system is covered each week, and in the event of rain, it is taken down and moved to an interior worship center.

“The church staff is super happy, and the quality and coverage of the NEXO GEO S12 system is just amazing,” Sardari adds.

For more information on NEXO and Yamaha products, visit www.yamahaca.com.