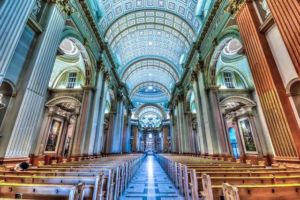 If you seek inspiration and perhaps a dose of humility, you might visit Montreal’s magnificent Marie-Reine-Du-Monde Basilique Cathedrale (Mary Queen of the World Cathedral Basilica). The interior may not be quite as grand as the Vatican’s St. Peter’s, after which the cathedral was modeled, but the gorgeous, 3 million cubic-foot building is a true gem. Inaugurated on Easter Sunday 1894, it was the first building in Montreal to cost more than one million dollars-so expensive that fundraising and construction took 24 years.

Like other large Catholic churches with vaulted ceilings, a transept, and many hard surfaces, the acoustics are challenging. The building’s old sound system was not up to the task. “The old system used traditional columns and was very outdated,” relates Jean Giroux, Director General of systems integrator Siscom, Inc. “It exhibited a lot of comb filter effects and poor directivity. Our challenges for the new system were to provide uniform coverage and clear intelligibility, using the minimum number of speakers, and to account for reverb times of more than four seconds in the 500 Hz to 2 kHz frequency range.” Siscom’s solution: Renkus-Heinz ICONYX digitally steerable line arrays.

beam-steered arrays, so he knew the technology well. “I visited the Renkus-Heinz booth at the 2004 AES show, read their brochure about plans for new steerable column arrays, and told them I wanted some as soon as they were operational,” he recalls. “I got one of the first models-the serial number was something like 00006-and demonstrated it at a big basilica between Montreal and Quebec City. We experienced for the first time how a sound beam can be directed like a light beam, and it was amazing! They bought a system right way. We’ve been installing Renkus-Heinz digitally steered systems ever since.”

For Mary Queen of the World, Giroux’s team designed a system based on ICONYX IC16-R-II digitally steerable line arrays, which feature eight 4-inch coaxial transducers, each with three high-frequency tweeters. “We experimented with two IC32s,” Giroux notes, “but it was not possible to cover the two arms of the transept and also cover the nave with adequate uniformity. So we installed six IC16-R-IIs for the main system: one in each arm of the transept, two at the crossing of the nave and transept, and two close to the front, at the mid part of the nave. With beam steering, the system produced uniform coverage with minimal reflections.”

Two more IC16-R-IIs were installed at the back wall, under the organ balcony and choir loft, to reinforce the choir. “Sound coming from the altar area goes through the six IC16s in the main system,” explains Giroux, “but when the choir sings, their voices are reproduced by the rear IC16s beneath the choir loft, so it sounds realistic.” A small amount of sound is delayed and sent to the speakers that cover the left and right transepts. A BSS Soundweb London Blu-series DSP handles the processing and speaker management.
The difference between the old sound system and the Renkus-Heinz system was dramatic and immediate. “When we completed installation in 2009, Cardinal Turcotte, who was the archbishop at the time, said the difference was ‘like day and night,'” Giroux confirms. “More recently, we installed an ICONYX system in the Notre-Dame Basilica in Montreal. In fact, there are four Catholic basilicas in Montreal, and we’ve installed ICONYX sound systems in all of them!”