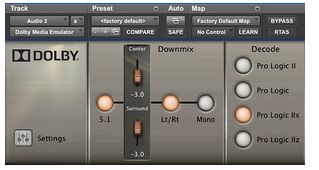 “Our strategic decision to distribute Dolby Media Emulator strengthens our current product mix and expands our reach into more post suites,” said Jayson Tomlin, vice president of business operations at Minnetonka Audio. “For our customers, Dolby Media Emulator is a bargain in itself. By bundling it with the SurCode suite without raising the price, we’ve created a one-stop shop for media producers that is truly an outstanding value.”

Dolby Media Emulator is a software tool for authoring and post that provides real-time emulation for Dolby broadcast formats. Acting as a plug-in for popular digital audio workstations, Dolby Media Emulator enables an audio engineer to simulate accurately how content will sound when played back through licensed consumer electronics. Dolby Media Emulator lets an operator preview the results of differing metadata values when decoding Dolby Digital, Dolby Digital Plus, and HE-AAC audio formats.

“With the majority of surround programs being played back in stereo and mono environments, correct metadata and downmix settings are a critical requirement for deliverables,” said Markus Hintz, director of global sales and business development at Minnetonka Audio. “In addition to previewing their metadata settings, audio engineers can use Dolby Media Emulator for standardized loudness measurement, proper monitoring of LtRt sources, and downmixes from all other sources.”

Rather than resort to using home audio gear in a professional workflow, engineers can use Dolby Media Emulator to validate mix and metadata decisions against a certified standard in their familiar monitoring environment.