First, Pentecostal Church off­ers a variety of music during worship, from Southern-style gospel, to contemporary worship, and everything in between. Unfortunately, the architectural style of our facility is not conducive to great acoustics – high, vaulted ceilings (65’ high), hard marble surfaces, stained-glass windows and a balcony present a challenge. ‑e sanctuary seats close to 3,000 and we run a front line of nine singers, a worship leader and a full band. We needed a system that would sound clean and bright, but be directional and avoid bouncing o­ the harder surfaces, but also reach every part of the room, and we wanted to avoid adding acoustical treatments, so we needed to choose the best system for our facility.

I was drawn to Martin Audio because of the quality of their control. We were able to run a demo of their MLA system before making any purchasing decisions, and it became apparent very quickly that Martin Audio products would do everything we needed them to do. As we were waiting for the quote on the MLA from Clark, they told us Martin Audio’s Wavefront would also be available. We were able to go to Infocomm to see a comparison of the MLA and the Wavefront side-by-side, and made the decision to go for the Wavefront Precision system, because it better ­to our needs.

We were looking for speech intelligibility ­first and foremost. Conveying the message whether it was song or speech is our absolute priority. Keeping the vocals over the music and the preacher’s sermon clear and present in what is a very reverberant space is critically important for us.

The optimization capability of Martin Audio WPC was very attractive on paper and if it did what it said it was going to do that was the choice we had to make. Getting the sound off where it didn’t need to be and focused on the audience where it belonged was crucial for us, and it did exactly that.

We relied on Clark for their help in choosing and installing the full audio upgrade. Our Wavefront Precision system includes 16 WPC a side for the main array, with a side ­fill array of six WPM a side covering the extreme outside corners. The stage was modi­fied to accommodate ­five CSX218 subs per side that are recessed into the front with everything powered by iKON amps. All the hangs are covered with white acoustical fabric to be more visually integrated.

When it comes to music reproduction, WPC is like sitting in front of a great set of studio monitors. We have a Midas Pro X console and we’ve gone from making 9dB changes in the EQ to 2 and 3 dB changes and really noticing the difference. The changes are very audible— we’re even hearing the compressors now if there’s too much reduction.

The coverage is truly exceptional. We have seating in alcoves and they were just getting reflected sound before. Now with the WPMs on the side, every seat in the house has even coverage, top to bottom, side to side.

We’ve also solved problems onstage with the new LE100 monitors. They combine compact, low pro­file enclosures that give us expanded individual coverage for performers and speakers and they sound really good. With the addition of the LE100 monitors, the sound is so clear we were able to avoid also purchasing in-ears for our worship team, which was a blessing, as many of them were uncomfortable using them. 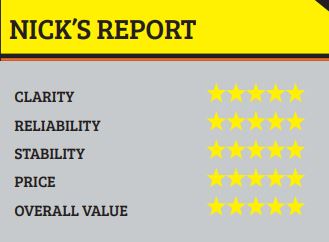 After our system was installed, we had the Arkansas International Camp meeting at the church, with over 4,000 attendees a night, and everyone was just blown away by the new system.

NICK IS A RESIDENTIAL CONTRACTOR IN CENTRAL AR AND HAS SERVED ON THE MUSIC TEAM AT FIRST PENTECOSTAL CHURCH FOR THE PAST 15 YEARS. HE HAS BEEN THE AUDIO DIRECTOR FOR THE LAST 5 YEARS AND HAS WORKED AS AN IN-HOUSE ENGINEER AT NORTH OF THE ROCK STUDIO. NICK RESIDES IN SHERWOOD, AR, WITH HIS WIFE LESLIE, AND THEIR TWO CHILDREN, EMMA & GRIN.