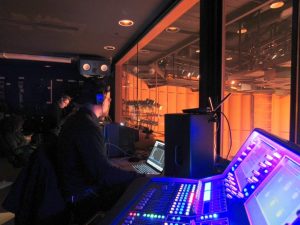 Markel Auditorium is a beautiful live performance venue with a 40-foot thrust stage, an orchestra pit that can be raised or lowered and a modern 5.1 theatrical surround sound system using an Allen & Heath dLive S Class S5000 Surface and DM48 MixRack.

Located at Hillsdale College in Hillsdale, Michigan, the auditorium’s original audio system was an LCR design with an older digital mixer. To modernize their system, the theatre undertook a major audio upgrade that gave them 5.1 localization of theatrical effects with highly transparent and natural sound quality while being rider-friendly for the many touring acts who perform at the theatre. 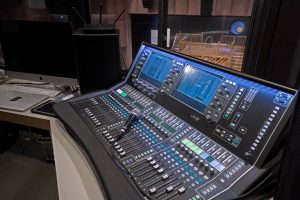 Design/build contractor Cory Champion of Fortress Productions recommended Allen & Heath’s dLive S Class digital mixing system to Markel which would integrate with QLab, a multimedia playback and cue-based software from Figure 53, to manage the theatre’s new system. Markel’s dLive includes a DM48 MixRack in the theatre’s sound booth and three DX32 Expanders which can be located where needed on the stage or in the orchestra pit to accept microphones and other sources and feed monitor loudspeakers. Champion installed a Dante card in the dLive which connects to a Mac running QLab software. The dLive provides native 5.1 sound effects placement and panning under command from QLab which takes theatrical cues from a director/producer in the booth.

A graduate of Hillsdale, Champion acts as sound designer for many college productions and mixes performances from touring acts. He says monitoring in the enclosed sound booth is very accurate and appreciates the added ability to mix on an iPad from a seat in the audience. When Champion introduced the retiring theatre department chairman to the new system, “He was in sound effects heaven being able to put things specifically where he wanted in the sound canvas of the space.” Champion also demo’d the system for a music professor using the theme song from “The Magnificent Seven”. The professor commented, “This is phenomenal. Even though the level is low, I can clearly hear the percussionist, every cymbal crash and every bass drum beat as he hit that head.” Champion concluded, “There is nothing else on the market that’s as flexible and easy as the dLive with this kind of transparent and natural performance.”