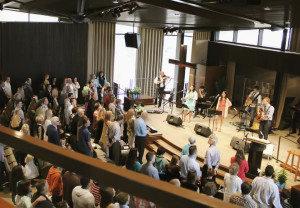 The system was designed and installed by Audio Techniques of North Hollywood, CA, which enjoys a long affiliation with the church. Called “MalibuPres” for short, the church presents services offering both contemporary and traditional elements. The new building was more than five years in the making, necessary after a wildfire burned down the previous facility.

Following that loss, the church initially moved to an area school to host its services, and then erected a 250-seat temporary structure to serve as the sanctuary until a new building could be established. Audio Techniques outfitted that facility with a quality sound reinforcement system headed by six flown EAW KF300 full-range loudspeakers and two SB1000 dual-18-inch subwoofers at stage left and right.

The new sanctuary, with a capacity of about 300, offers a main floor backed by a gently curved two-row balcony. It’s a beautiful space, made primarily of glass and steel with large windows to each side of the platform providing a view of the Pacific Ocean. The attractive aesthetics would seem to make for a challenging acoustic situation, but that’s not the case, according to Bob Ludwig of Audio Techniques.

“We thought the acoustics would be horrible given the building materials, but fortunately the church brought in an acoustician who did a really fine job in alleviating any issues,” he notes. Treatments include strategically placed curtain strips as well as compressed fiberglass that covers about 80 percent of the ceiling while providing an attractive look.

The main loudspeaker system is comprised of just two EAW QX564i full-range loudspeakers, one flown left and the other flown right, above the front of the platform. The QX Series is designed to deliver high output with exceptional coherence, loading an efficient mid/high compression driver with a constant directivity horn that’s joined by four 12-inch woofers arranged as vertical and horizontal pairs. Because the four LF transducers surround the coaxial mid/high compression driver symmetrically in both the horizontal and vertical planes, response is highly coherent across the full frequency spectrum.

“The QX Series is absolutely ideal for applications like this, where there’s need for strong full-range performance from a compact, easy-to-fly package that’s also easy on the budget,” Ludwig states. “They meet a lot of needs in terms of both substance and style.”

The SB1000 subwoofers from the temporary facility were repurposed, and are housed in acoustically optimized enclosures built to the left and right of the platform. Front fill is supplied by four EAW JF80 compact loudspeakers placed equidistantly along the platform, with four more ceiling-mounted JF80s offering additional mid/high presence in the balcony, time-delayed in relation to the main loudspeakers.

Ludwig notes that Josh Kaufman, musical director for the church, was instrumental throughout the design and installation process, guiding both him and the church members to ensure the new sound reinforcement system met their needs. The day before the grand opening, Ludwig and Kaufman tested the system and decided not to use any EQ, as it sounded pretty fantastic right out of the box.

“Josh suggested we might need to fine tune it once we heard it in a room full of people, but at that point it sounded perfect,” Ludwig concludes. “After that first service he said ‘don’t touch a thing’ and we haven’t. The acoustician did his job right and EAW did their homework. It’s a relatively simple system but delivers exactly what MalibuPres needs. The QX Series plays a really big part in making projects like this work, exceeding the expectations of the client.”