Why an Entertainment Lighting Network Solution Works For Us 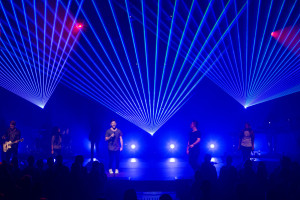 For the last decade, media has played a major role in the worship services at Bayside Church. We welcome over 13,000 people every week to 15 services across four local campuses, including six weekend services at our largest campus in Granite Bay, California. The sanctuary at this campus holds about 2,000 people in a multi-purpose space with retractable theater-style seating and a stage (about 50% of which is made up of 4×8 foot tour decks) that can be reconfigured or partially removed to expose the floor. Two 12×22 foot front projection screens, for IMAG and other presentation materials, can also be quickly moved and re-hung because of the tour-style rigging plan in the building (which includes almost all lighting truss, PA, and video gear in the air).

The building’s initial AV system was installed about 10 years ago and has since seen many upgrades. Our first network-based lighting system was installed after about a year in this building.  Most recently, in 2014 we upgraded consoles to a grandMA2 light and added Martin Viper Profiles, Viper Washes and Aura Washes to our lighting package.  We also added a more robust lighting network and distribution upgrade, moving away from multiple DMX and Ethernet lines that ran from Front of House to the stage.

All of the existing lighting networks throughout the building had been getting old, and the entry-level nodes we were using were introducing data issues and additional latency into the system. Since our services are basically a touring production that happens to sit in one building (most of the time) and doesn’t look like a ‘church’, we decided to stop looking to the ‘church’ market and pursue a long-term solution from the concert touring world. LUMINEX equipment was first suggested by a Sacramento-based touring company and integrator, Dave’s World Lighting & Scenic Designs. They had used LUMINEX switches for the past year as the backbone of their network on the Eli Young Band national tour and found them to be a rock-solid (and very much tour-tested) solution.  The switches especially shined in an area that is very important to all of our system designs at Bayside, redundancy.

We initially considered starting small with a single LUMINEX node, but we ultimately opted for two GigaCore 12 managed gigabit Ethernet switches, which are designed to cope with more demanding lighting and AV installations like ours. We also added an 8-port Ethernet-to-DMX Art-Net/sCAN node in a 1RU enclosure and three DMX 10-port hubs. The 8-port node serves as the linchpin of our network infrastructure. By adding the switches and hubs we built a single, solid network that would be reliable for many years to come and could serve a much larger lighting rig than we currently have.

Our new system, obtained from BP Productions in West Sacramento, was going to get a very early – and very big – test: We needed to get everything done early in November 2014 so the system would be up and running for our busiest time of year, the Christmas season. We held 16 Christmas services from December 18-24, each about 90 minutes long.  For these services we hung a special 360º circular screen, 21 feet in diameter, above the stage with a circular lighting truss inside it.  Seating for the congregation was configured in the round.

LUMINEX hardware is set up for eight DMX ports, and we used all eight for Christmas.  We controlled the projection network, the MA console network, the media server network and lighting data distribution over LUMINEX, which in turn drove all the content with live feedback of video into the consoles and remote computers at the control center. It worked seamlessly. Thankfully we didn’t have to use our backups during a show, but when we tested them, the network worked seamlessly with them as well.

Since then we’ve hosted a multi-day youth conference at the church, which included  a performance by Switchfoot, the San Diego-based alternative rock band. We set up a lighting network similar to our Christmas services, but we mapped LED panels instead of projection surfaces. And just as you’d expect, the LUMINEX hardware performed perfectly.

Although we’ve only had our LUMINEX system for a short time, we’re very pleased with it – it has absolutely lived up to (and exceeded) our expectations. Once we installed the system we haven’t had to touch it; its configured settings and redundant backups are very cool. The web interfaces are easy for me to understand and – this is a huge point in a church – are even simple enough for me to teach to our volunteer team. I have had very little previous networking experience – Art-Net implementation was a mystery to me even as our LUMINEX gear was being installed. But that just shows top-to-bottom how easy our LUMINEX hardware has been to learn and deploy. 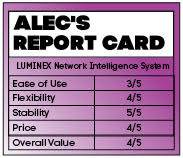 We expect that our current LUMINEX system will serve us well for the next five to eight years, and plan to deploy similar LUMINEX systems as all future campuses as our church expands and our needs grow.

Alec Takahashi has been a member of Bayside Church since childhood and was hired as part of the technical team when he was 15. He currently holds the post of Lighting Designer at Bayside Church, a role he also fills on a freelance basis with Lincoln Brewster on the Christian musician’s national “Oxygen” tour.