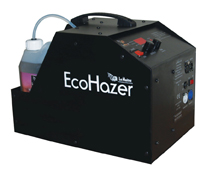 Le Maitre hazers are already known for their incredible output and low power consumption, not to mention the haze fluid which converts to produce the purest, most efficient and long lasting haze on the market, and which the company has now rebranded as PureHaze Fluid to further underline these benefits. The new EcoHazer takes the environmental aspect even further and Le Maitre believes that it is the most energy efficient water-based hazer on the market today!

The EcoHazer consumes an incredibly low 100-150W, a rate that other haze units on the market with a similar output simply can’t match, with many requiring up to 1500W – that’s ten times the electrical energy! The EcoHazer uses a completely new heating system borne out of Le Maitre’s R&D team’s experience when they developed the HazeMaster and which provides two significant benefits. Firstly it is highly efficient, drawing less than 0.4 amps at operating temperature. Secondly it is self-regulating temperature-wise, so there’s no risk of burning the fluid or damaging the unit.

Furthermore there is no trade-off with output, in fact quite the contrary. At first glance the variable output of 2cc/hr to 50cc/hr haze may seem on the low side but in reality the effect is akin to competitive units of some 400cc/hr! So how is this possible? The answer is simple – Le Maitre’s haze fluid. The PureHaze Fluid is 85-90% active ingredient combined with just 10-15% water. Not 80-90% water and only 10-20% active ingredient as is the case with so many other haze fluids on the market. In fact many aren’t even true hazers at all but simply smoke machines with fans and which consequently have to use much lower concentrated solutions. As a result, competitive haze systems need to create 8 to 9 times the output to achieve the same haze effect that is achieved by the new EcoHazer. Put quite simply a competitive unit would need to consume 8 to 9 times more fluid just to produce the same haze effect! The EcoHazer is both much more efficient and cost effective. Combine this with the fact that Le Maitre’s sugar-based fluid is extremely green and completely safe* to use on the stage or in crowded clubs and Le Maitre’s EcoHazer is an environmentally friendly winning product all round.

Operation of the EcoHazer is either manual via a user friendly control panel with two rotary controls for output and fan or via intelligent, self-detecting DMX (2 channels). The maximum fan setting is 71m3/hr and direction is manually adjustable from 0 – 90°. A 3 digit LED display clearly displays the settings. The EcoHazer takes just 5 minutes to heat up and then it’s ready to go. Self-purging at the end of operation is quick and easy – just haze off and then power off will ensure haze is flushed out of the system keeping it clean for machine life longevity.

*Le Maitre’s PureHaze Fluid is included in equipment guidelines, calibration and health effects reports on the use of smoke and haze prepared by bodies including ESTA (now PLASA) and Environ.