Granger Community Church is going on 32 years old and runs a full contemporary-style worship for roughly 3000, using pop music to illustrate their message and content, every weekend. The integration of music and message is very important, so the genre of music from week to week changes, but always with a high expectation on excellence. We knew our console needed to be able to produce the sound we wanted, and we did demo several different consoles. However, we ultimately chose two Lawo consoles – the mc²56 for front of house, and the mc²36 for monitors – because the quality and sound we needed was there, and the redundancy they build into their system made it a fail-safe choice. Initially, we were a bit hesitant to look at Lawo, because they had never done an install of this type before in North America, but after testing the console we were completely won over – as a matter of fact, we liked it so much we kept the demo console for a week longer than we had anticipated.

Our Lawo system features a 48-fader Lawo mc²56 console handling front of house and broadcast mix duties, with a 40-fader Lawo mc²36 console for monitors. Both consoles can independently access and control all sources over an IPnetwork created by fiber and ethernet connections to a Lawo Nova37 router.

The mc²56 console is capable of a maximum of 888 fully configured DSP channels with 144 output buses and 8,192 x 8,192 mono-channel matrix capacities. The console offers complete flexibility to route and assign any combination of input and output signals to any faders and includes Automix capability, built-in dynamics and signal processing along with seamless and control of a Waves Soundgrid system for additional effects plug-ins which can be assigned and controlled directly from the console surface. The mc²36 console handles monitor mix duties and includes up to 192 DSP channels, 128 aux sends, and its own internal 512 x 512 router and all the same features and functionality offered on the mc²56.

The Nova37 is a plug-and-play audio router serving as an IP “cloud”, providing all our connected consoles to have immediate access to all sources, while a comprehensive user rights management ensures secure operation. The Nova37 gives us greater flexibility to grow for the future; for example, if we wanted to add a third LAWO console, it would be just a matter of connecting it to the router, or if we wanted to connect our campus across town at some point, Nova37 would allow us to do so.

Several Lawo stage boxes are also connected to the Nova37 IP router, including two Compact I/O’s and a DALLIS frame, as well as an A__digital8. The Compact I/O offers 32 mic/line inputs, 32 line outputs, 8 AES3 I/O (stereo pairs) and 8 GPIO. Our drum kit gets moved often, so we‘ve chosen to have a Compact I/O located on our drum riser to cover our drum mic and percussion connections, as well as output for our drummer’s monitor mix. Our second Compact I/O is located in our broadcast area, and handles all of our audio connections to and from our broadcast equipment.

The DALLIS frame, a modular IO box which features 72 analog inputs and 48 analog outputs, is used for wireless microphone and some of the stage inputs, as well as outputs for in-ear and stage monitors. The DALLIS frame is completely redundant and configurable, so while we decided to load it up with analog I/O, it can be configured for MADI, AES3, HD/SDI, and other signal types.

Due to some scheduling issues, we made the decision to install our consoles the week of Christmas eve. This meant that we had a really quick learning curve and turn-around time to get this all done. Even with the time crunch, we had a volunteer able to run the monitor mix position the very first weekend, which was amazing! Our volunteers are policemen and mechanics and stay-at-home moms, so the fact that they were all able to learn the system and feel comfortable enough to use it so successfully so quickly really speaks to the ease-of-use of the LAWO products. 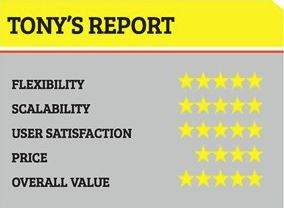 If we had the opportunity to do it all over again, we wouldn’t change a thing. The level of support we’ve received from LAWO has been incredible. LAWO has been very actively developing software updates for the live mixing side of audio; they have been able to incorporate our feature requests into these updates as well – honestly, we feel like we are part of the LAWO family. We just love the entire system, from the consoles through to the stage boxes, the routers, everything about them works beyond our expectations.

TONY STAIRES CURRENTLY WORKS AT GRANGER COMMUNITY CHURCH IN GRANGER, IND., AS THE PRODUCTION DIRECTOR. HE’S WORKED IN LIVE PRODUCTION AND AVL INTEGRATION OVER THE PAST 18 YEARS AND HAS WORKED WITH SEVERAL GRAMMY AND DOVE AWARD WINNING ARTISTS.