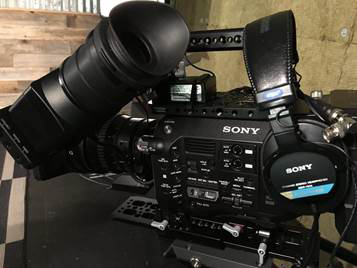 Lake Pointe Church serves a diverse group of congregants through in-person, live streaming and on-demand worship services. With locations in Dallas, Austin and Corpus Christi, Texas, the multi-campus church is a cornerstone of the state’s faith-based community, and their message extends worldwide reaching nearly 3,000 people online.

Chip Acker, Video Director at Lake Pointe Church, noted that since his organization is focused on video production and streaming, it’s important to have high-quality, easy-to-learn equipment that can be used and maintained by the church’s largely volunteer staff. Acker and his team of six content creators produce a range of materials employing a variety of styles and looks from broadcast segments, run-and-gun and last-minute shoots to fully scripted and produced projects, in addition to church services and events.

The Lake Pointe team uses Sony 4K cameras — from the FS7 and FS5 camcorders to the full-frame α7S and α7S II interchangeable lens cameras — in nearly every aspect of the ministry’s video production to capture services and events and handle the streaming.

“We have integrated the FS5 and FS7 into our live weekend IMAG at our Rockwall campus, and for broadcasts to our seven other campuses,” Acker said. “We produce videos to promote ministry events, recruit ministry help, train staff and volunteers, document milestone occasions, and tell stories of our mission work in our communities, across the nation and around the world.”

Lake Pointe is still outputting a majority of their final productions in HD, but they also recognize the benefits of shooting in 4K, especially the flexibility 4K offers when editing, such as “the option to punch in to a tighter shot, within the frame,” Acker said. “It gives our editors more options when telling the stories of Lake Pointe Church.”

“Our first purchase was the Sony α7S, with a third-party 4K monitor/recorder,” he continued.  “The camera’s small form factor lets us pack lightly when traveling to shoot video with our partners in remote parts of the world.”

Acker and his team have put the cameras through their paces in some less than ideal scenarios.  For example, he explained a shoot that took place in Alaska using the α7S.  “One day we shot in dark, cold gold mining tunnels where the ISO range allowed us to shoot with limited lighting,” he said. “The next day we shot on a glacier and in ice tunnels. The camera performed well, despite the change in conditions.” Overall, he finds the Alpha line of cameras to be great for traveling to other countries as they allow his team “to capture beautiful video and stunning photos with the 35mm sensor. The high ISO performance allows us to capture images in a wide variety of settings, which is very appealing when traveling to remote locations.”

After seeing what a successful companion the α7S was to their efforts, the team next purchased an FS7.

“This camera lets us transition from a ‘DSLR-style’ workflow back to an all-in-one shooting option,” he said. “The internal 4K recording, wide dynamic range, and in-camera audio recording (with XLR inputs) were the primary attractions of the FS7.  The other key points that drew us to the FS7 are the Super 35 CMOS sensor, in-camera 4K recording, the ability to output 4K RAW with our extension unit, an array of shooting modes, and the ability to interchange accessories including the XLR-K2M, which allows us to use XLR mics, and lenses like the Sony FE PZ 28-135mm and Sony EPZ 18-105mm zoom lenses.”

Shortly after Lake Pointe bought the FS7, the smaller FS5 camera was announced and the team fell in love with its size, balance and efficiency. “For many of our shoots, the FS5 is the perfect ‘grab and go’ camera,” Acker said. “It still gives us the quality of the Super 35 CMOS sensor, and many features that the FS7 offers, but in a much smaller unit, which allows us to produce excellent images on a moment’s notice.”

After using many of Sony’s latest cameras, it’s no surprise that the church’s most recent purchase is the α7S II, which Acker praised for “its ability to record 4K internally and still give us the small form factor and lightweight packing ability for our remote shooting.”

The video team appreciates the durability of Sony’s cameras, the longevity of their batteries and the reliability of Sony’s SD and XQD media cards, since their travels frequently take them to locations such as Mexico, Ghana, Egypt, South Africa and Asia.  They find peace of mind in knowing they can count on Sony to deliver time and again, despite the challenges inherent with each trip, and have found that the wide dynamic range of each of Sony’s cameras makes it much easier to adapt to various shooting conditions and demands.

Acker finds it beneficial to work with a complement of Sony’s cameras since they all have similar interfaces and functionality, with each camera in his arsenal also serving a specific purpose.  “We chose to purchase Sony cameras for the ability to match looks, shooting quality and codecs as much as possible,” he said. “It also gives us the ability to interchange lenses and other accessories, which gives us lots of flexibility when building a camera rig for a particular shoot.”

Acker continued, “Pairing the right gear with our wide range of production styles gives us the best options for our church.  The variety of Sony products that we own allow us to put the right gear into action, with any of our production requests and it also helps us save money over the long-term.”

Christmas Candlelight service (FS5 and FS7 were used as handheld cameras and integrated into our in-house production system): https://vimeo.com/149840930