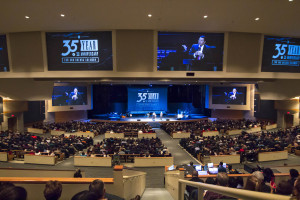 McLean Bible Church, a non-denominational, evangelical Christian church with multiple locations in the Washington, D.C. metropolitan area, hosts an average of 13,000 worshippers each weekend at its campuses in Arlington, VA, Montgomery County, MD, Loudon, VA, Prince William, VA, and Tysons, its largest site, in Vienna, VA. In order to deliver maximum impact for both its music and message, MBC Tysons—from which Senior Pastor Lon Solomon’s sermons are broadcast live to the other locations—recently became the first-ever house of worship to install an L-Acoustics K2 loudspeaker system.

The system at MBC’s 2,400-seat Tysons sanctuary is remarkable for a number of unique aspects. Designed by L-Acoustics’ own specialists, led by Applications Engineer Chris “Sully” Sullivan, it consists of 10 K2 enclosures per side in a left-right stereo configuration with six SB28 subwoofers per side flown directly behind the main K2 hangs, reflecting L-Acoustics’ core philosophy that consistent directionality of a sound source is critical to a coherent sound experience. Buttressing the main system are eight ARCS II enclosures configured in four arrays of two enclosures each, installed as delay speakers, and 12XT and 8XT enclosures for the front fill.

Simultaneously, the church installed an L-Acoustics ARCS WiFo system at its Montgomery County campus, consisting of six ARCS WiFo enclosures plus six flown SB18 subs in a left/right configuration, along with three 12XT enclosures for center and out fill. Both installations were completed this past spring.

Horsham, Pennsylvania-based AV integrator and Certified Provider Bauder Audio Systems provided the systems and supervised their installation with assistance from MBC Director of Engineering Craig Campesi and Senior Systems Engineer Tony Aiello. “The church has a very, very capable AV staff and they’re not there just to mix the service on Sunday; they are full time. It’s not something you see every day,” observes Bauder Production Manager Brian Naab.

They also have a predilection for thoroughness. Naab points out that the church’s technology staff organized a series of PA system demonstration tests from three different leading manufacturers prior to selecting L-Acoustics’ K2. “They spent over two months listening to these systems, which they rented from various suppliers,” says Naab, noting that by investing in the short-term rentals the church was able to spend time getting deep into the systems’ nuances, rather like taking a car for a two-week test drive instead of the usual two-hour one. “They really did their homework, which is smart, considering the investment they were about to make.”

MBC Director of Technology Marvin Haines says that the PA comparative demo brings to mind the church’s first encounter with L-Acoustics, at the 2014 WFX show in Dallas, where he and other members of the MBC team—including FOH Engineers Chris Loizou and Tony Alany and Executive Pastor of Weekend Services Cory Thurman—heard a Kara system in side-by-side comparisons with other loudspeakers. “We were sold on it right then and there,” he says.

Doing a similar comparison in the church solidified that decision. “The K2 won hands down, and it was less expensive than one of the other systems, which further reinforced our choice,” he says. That emphasis on economy and efficiency played out in other ways, too. For instance, the 133 amplifiers that powered the previous sound system in MBC Tysons have now been replaced with 14 L-Acoustics LA8 amplified controllers. “We were able to replace all of those old amplifiers, along with a seven-foot-tall DSP rack, with just the fourteen LA8s,” says Naab. “And since all of the DSP is integrated into the amplified controllers, the entire power and DSP package takes up even less room. This system is greatly simplified and far more coherent and effective than the previous point source system the church had in there before. This church does things their own way and they’re very thorough about how they approach things. That’s why the K2 is such a good choice for them.”

Haines says the real test came when the worship team and the congregation were introduced to the K2. Both, it turns out, were very pleased. “It’s been very positive,” he says. “Everything sounds clearer, fuller, and the broadcast side is also benefiting because the engineer is getting a better picture of the sound in the sanctuary. The senior pastor is in love with it—he’d like to have it at 100 dB every weekend! It was a good decision all around.”