Wesley Hall is by far the most utilized space in the entire church. In addition to Sunday services, it is used for dinners, receptions, district events; youth group events, children’s movie nights, and outreach events during the week. Consequently, any upgrade to Wesley Hall always has the requirement of flexibility, and the KanexPro 4K/60 HDBaseT™ 4×4 Matrix Switcher (MXHDBASE4X4-4K) is what brings flexibility to our upgraded video system. The new video system includes the following display outputs: two 80 inch TV screens mounted at the front of Wesley Hall for the congregation, a short throw projector for those on stage, and a third TV in the hallway for announcements and content from the service. Input sources to the new video system include an iMac running ProPresenter for lyrics, video, and slides, a Blu-ray player for physical media, and a video camera. The camera is mounted to the left above the front half of the space to enable the congregation to see things that they could not otherwise, such as the small children that sit on the floor during the children’s message. The KanexPro matrix switcher is truly what ties this whole video system together, allowing us to feed any of our sources to any combination of displays simultaneously without any rewiring. 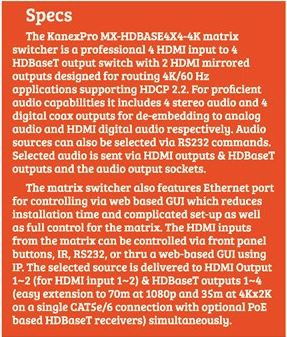 Before the service, ProPresenter is shown on the front screens, while announcements are shown in the hallway. During the service, all three screens primarily display the ProPresenter feed. However, during the children’s message, all three screens switch to show the feed from the camera. As mentioned earlier, all of our equipment can also be utilized outside of services. For example, the Blu-ray player is often used for children’s movie nights, and the iMac may be used to display a PowerPoint presentation for lay leader training. Regardless of the event, the KanexPro matrix switcher allows anyone with or without a technical background to easily utilize our new video system.

Installation and set-up of the KanexPro 4K/60 HDBaseT™ 4×4 Matrix Switcher was very straight forward. Thanks to builtin HDBaseT™ support, we were able to run the same type of cable for data, audio, and video, namely, shielded Cat6a. This prevented us from running finicky, application specific cable (e.g. HDMI) or cluttering up our rack with extra converters, patch cables, and wall wart plugs.

A stand-out feature is the ability to control the KanexPro matrix switcher via a web interface. We utilize this functionality during the service because the switcher is mounted in a closet across the room. However, the website itself is a little clunky and out-dated, so we hope that KanexPro will release a firmware update that includes a new web interface with a more intuitive UI and additional features.

Overall, the Kanex Pro matrix switcher is very much a plug-and-play device. The only non-trivial configuration during initial setup is TCP/ IP to enable network control of the device, but this process is well documented and is not required for the device to be used. Within 10 minutes of training, our volunteers were able to understand volunteers were able to understand switching inputs and outputs, allowing us to incorporate the KanexPro matrix switcher into our contemporary service with ease. 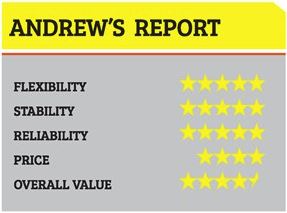 As our contemporary service grows and evolves, I have no doubt the KanexPro matrix switcher will help us continue to provide an engaging worship experience to our congregants for years to come.

ANDREW STORMS IS A RECENT GRADUATE OF VIRGINIA TECH, WITH A B.S. IN COMPUTER ENGINEERING AND A MINOR IN MUSIC TECHNOLOGY. HE CO-LED PRODUCTION TEAM WITHIN CRU AT VIRGINIA TECH, AND IS NOW INVOLVED WITH SOUND ENGINEERING AT WATER’S EDGE CHURCH IN WILLIAMSBURG, VA.