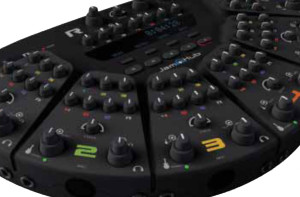 As an audio guy, when you think of rehearsing with a band the ﬁrst thing that comes to mind is the setup. What will be needed to make it happen and be effective for the band? As our church grows and we see that we are developing certain needs in the music ministry, a second rhythm section rehearsal was needed at our church. We currently have two different rhythm sections that play at different services during our weekly service schedule. Our rehearsals are scheduled for Thursday evenings and we have both rhythm sections rehearsing at the same time. We have the weekend team rehearsing in the main sanctuary and the Wednesday night team rehearsing in one of our annex rooms.

Enter the JamHub. When we ﬁrst heard about the JamHub, it seemed like a good idea, but we really didn’t know much about it. It’s basically a cool-looking, compact headphone mixer that sits on the ﬂoor with remotes for each position allowing everyone in the band to dial in their own mix to their taste and hear/play better.

We were setting up a portable mixing console, electric drum set, bass guitar, Line 6 guitar pod, keyboard and a headphone distribution amp. This was a lot of gear to lug around. We would set up one hour before rehearsal and stay after rehearsal for tear down, which would usually take around 45 minutes to an hour.

When the JamHub arrived, we put it to good use right away. When unboxing the unit, we were pleasantly surprised with its size. It was smaller and lighter than we expected, which was great. It has clear labeling on the unit and easy to use controls. We have the Tour Bus edition and it also has a LCD display, which looks great.

The unit itself is rugged and has a rubbery feel that feels great to the touch. First of all, using the JamHub cut our set up time down to around 30 minutes, because it is very simple to connect and organize all the channels. We no longer have to carry around all the extra equipment like the portable mixing console or the headphone distribution amp. The JamHub has great stereo ¼” cables and adapters that are color- coded. This is really a great feature. With this system, practically anyone can set it up quickly. It makes for easy troubleshooting as well. We have been using the JamHub for over a month now and it has made our lives easier. We also like that we can add a microphone for our music director to communicate with all of the team through the headphones.

Another great feature has to be the SD card slot that allows you to record your rehearsals for critique at a later date or mixing to create a nice demo or sharable track. JamHub has really made a difference in what we are doing here at our church.

After using the JamHub I cannot see our team functioning without it. This is a product we would recommend for someone that is looking for a great solution to on-the-go and even permanent setups.

Josh Solis is the Audio Director at Westover Hills Assembly of God in San Antonio, TX, overseeing all the audio needs for their campuses, as well as all studio post production.