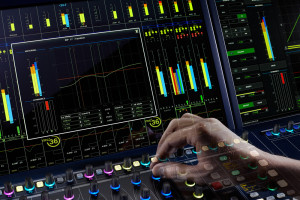 The Lawo mc²36 All-in-one Production Console is a compact, universal console for live/theater/install applications as well as broadcast, inheriting all the features from the mc²56 and mc²66 consoles. Photo courtesy of Lawo

More and more churches are turning to web streaming of their church services as a way to expand their reach, allow military families on deployment to stay connected to the same message, and even as the basis for multi-site delivery of live preaching.

When we choose to deliver our content via a web medium, or even to archive storage for later use, the video must have audio content along with it – and this demands that we spend some time considering how the audio will be “mixed” for the broadcast audience.

When attendees experience your service live, they are hearing a complete package of sound that is composed of any stage volume, plus the output of the sound system, as well as the results of those two sound sources interacting with the room. Your sound engineer mixes the audio so that the mix sounds as natural and appropriate for the style as is possible.

Start with a simple “Mains” Send

For budgetary reasons, many organizations start by just taking a Left + Right feed directly from the live console, and send it to the streaming encoder or other video capture/record device. The challenge comes when that audio + video package is played back into the viewers computer our audio system – the “mix” of audio that was created is now missing two of the three components that were part of the live environment – the room, and the stage volume. As a result, the mix most often does not sound correct – things that are naturally loud in the room (such as drums) are usually missing from the audio track. This is because the mix engineer did not have to add very much of the drums through the house PA, since the acoustic level of the drums in the room was adequate for the mix. Any room modes or acoustic cancellations were also compensated for by the mix engineer, resulting in too much (or too little) of a given sound, or a less than optimal EQ in parts of the mix.

The first question we must ask on the road to broadcast audio is, “Are we going to be streaming the worship part of the service?” If your answer is no, you may be able to use the Left + Right feed direct from your house mixing console. Since you will only be streaming the singular voice of your speaker/pastor and not a full band, speech straight from the mixing console may serve you well without any extra effort.

But let’s say you will be broadcasting worship – through web streaming, or to alternate overflow rooms, or even via campus-wide CCTV, or over the air. At this point, you may need a broadcast console, in order to mix the audio just like the engineer at front of house was doing. However, your audience will be a pair of near-field monitors, which generally have much less interaction to the room you are mixing in than your house PA does – due in part to their proximity to your ears. Because your mix will not have as much environmental interaction, it will tend to sound correct when listened to in places other than your studio.

If you are just starting out with distributing your services to other destinations like web viewers or overflow rooms, you may not have the budget to purchase an additional mixing console for broadcast purposes. There are several ways you can “get by” in the meantime.

Most live consoles have auxiliary sends – and the ability to set them to “pre-fader” or “post fader.” If your aux bus is set to pre-fader, then the level you send from each channel out that particular aux will not be affected by the mix engineer’s movement of the main faders. This is commonly how monitor sends are configured – so that adjusting the house faders does not affect the monitor mix.

When the aux is set to post-fader, the level that you send from each channel on the console out the aux bus is affected by the main house fader on each channel – if the fader is raised, then the level of that channel out the aux bus is raised. Here’s how this helps us: with the faders all set at “O dB” or “Unity” then the channels are being sent out the aux in exactly the same ratio or “mix” to each other as the front of house mix, and any changes made by the house engineer will show up in the aux send. This is really helpful in cases when worship leaders change and levels need to change in the mix going to your alternate destinations. But since the mix will still be a “copy” of the main mix, we’re not done yet.

Let’s say for example that your drums sound great in the house, but on the recording or web stream, the drums are too soft and in the background. What you need to do is either raise all of the drum “sends” for the aux you are using for your feed, or lower all other sends except for the drums. You still retain the benefit of the mix being adjusted by the house engineer for leader changes and other nuances, but you now have the ability to compensate for overall level deficiencies in the resulting aux bus mix.

Don’t be afraid to experiment – every situation is different – and what you are most concerned with is what the results sound like. If you can get clear consistent sound for broadcast directly from your house console, consider yourself blessed – all of the variables are working in your favor. If the results are sub-par, you now have a better idea of what steps to take to correct it.

This article appeared in the March 2015 issue of Technologies for Worship Magazine.  You can read the whole issue online here.