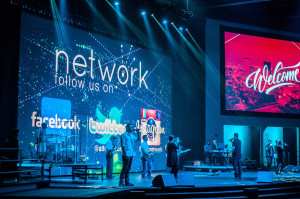 The Abundant Living Faith Center (ALFC) in El Paso, Texas, is a nondenominational, multicultural church with a large congregation of 30,000+ members and a spacious 3,620-seat main auditorium. The ministry sought to improve the quality of the auditorium stage’s visual backdrop and recently installed a large high-definition LED video wall by Elation Professional.

Design and systems integration company Michael Garrison Associates (MGA), who has a history of cooperation with the church dating back to 2004, replaced the mega-church’s original center projection screen with a 6mm pixel pitch EZ6 LED screen that produces high definition video. The EZ6 video wall is 38’ wide by 20’ high (20 x 11 panels, 1920 x 1080 pixels) and is suspended by 8 chain hoists allowing for vertical movement when desired.

After researching their options for high resolution LED video on both a technical and cost level, ALFC had several choices according to MGA owner Michael Garrison. Although some of the lesser expensive products were attractive, long-term support and serviceability from a reputable company were the deciding factors.

“When you purchase a sophisticated product you need to think about service on both the hardware and software side,” Michael Garrison comments, “and as a dealer we have to work with a manufacturer who is willing and able to stand behind the product. I told the church that they could save some money but that they’d be taking a risk. In the end, the church leadership decided they would have the security of not only MGA standing behind the product but a reputable manufacturer in Elation who is based in the US and has a reputation for taking care of their product.”

MGA required support from Elation for some of the technical details, including assistance on how to rig the large screen not only in the most cost effective way but in the safest manner as well. “Elation also worked with us to color match with the side projection screens and the result is great,” Michael states. “We’ve had wonderful support in the installation phase but also before that in the design phase.”

MGA worked closely with ALFC’s lead video/lighting tech Jimmy Salas throughout the decision-making, design and installation of the new Elation EZ6 video wall. “The Elation EZ6 panels have completely transformed the way we do productions here at our church,” he says. “We can now use less sets and have a greater impact on the production at the same time. Every year we always try to add some new elements to our productions and with this wall it makes it very easy to add new things without having to spend too much money or time.”

Completed in September 2013, the new LED video screen has provided many advantages over the old center projection screen besides the better image quality. The creative team at ALFC no longer has to deal with interfering with a projection path for example, which allows for greater flexibility in set/performer placement. The ability to raise and lower the LED screen, or breaking it up to create new set designs for the stage, has also been a creative plus.

After the panels were installed, an extra challenge arose however that was not entirely expected. Because El Paso has a very dry and arid climate, static charge became an issue. Michael comments, “Although the panels meet industry standards for dealing with static discharge, we had some problems when people would touch the modules. We implemented a static reduction measure that has proved to be very effective, which was done at no further cost to the church. Elation went above and beyond the call of duty to test this and MGA as a dealer couldn’t have asked for better support from a manufacturer.”