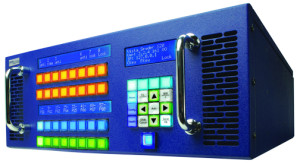 Faith Bible marks the first use of a Vista Spyder by Hairel, which provided full AV and theatrical lighting for the sanctuary.  “I knew about Spyder and got in touch with Vista because I thought it would be a perfect fit for this installation,” says systems designer Bruce Simmons.  “My cold call to Vista turned into a four-hour conversation.  They arranged for a demo, and the church was elated by what they saw.”  The video projection system will be operational in late January 2015.

The new sanctuary has a raised platform area at its center.  A motorized 25×9-foot screen drops down from the ceiling for use in worship services and special events and productions.  Two additional 16×9-foot screens flank the center screen and are permanently affixed to the walls.  A two-projector center edge blend and the two outer single-projector images are accomplished with four Barco RLMW8 projectors and a Spyder X20 with 8 inputs and 8 outputs.

“Spyder acts as the worship video switcher,” says Simmons.  “It’s integrated with a PC-based still server, which is loaded with background images and rack mounted with Spyder.  Spyder controls it pulling up images as needed.”

Two Macintosh computers loaded with Pro Presenter are also sources: one for song lyrics and Bible verses, which are keyed onto the backgrounds, and one for moving video playback.  Live cameras for IMAG also feed the system.  Faith Bible expects to add environmental projection capabilities, too, enabling the walls and sanctuary architecture to become canvases for still images and video.

“With Spyder the entire video output is treated as one pixel space to give the ability to create a much larger visual impact,” Simmons says.  “Spyder can blend the two environmental projectors the church will likely add with the other projectors to create one big image, if desired.”

Spyder also allows Faith Bible to scale productions from the complex to the simple.  “The church has a very skilled technical staff, so they are comfortable with a really sophisticated technical system, but they also have the ability to dial things down to a one-operator show for weddings or funerals,” Simmons explains.  “That means Spyder can handle completely different services and events week to week.”

He notes that, “very sophisticated technology typically means a system that’s difficult to use.  But that’s not true with Spyder.  We were able to train Faith Bible’s volunteers on Spyder in just a few hours.”

Simmons reports that, “Vista Systems has been extremely helpful all along the way” of the design and install process.  “Spyder is a great product.  I recommend it to anyone who wants the best possible video presentation system.”

For more information on Vista Systems, visit their website at www.vistasystems.net.