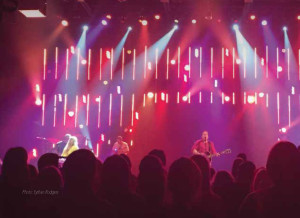 This summer, Journey Church has had the great opportunity to utilize some new products from German Light Products (GLP), including their SceneX 33.3mm LED pixel tape (model: 505030HUPXB) and the PP4 Pixel Driver. Unlike standard LED tape, this pixel tape has individually controllable diodes, which affords a massive amount of ﬂexibility. At Journey, we already own some older style Scenex tape, the WS2801. We used all these items together to create a low res LED screen. The led tape that comprised this low resolution led screen was all controlled via artnet and Madrix.

Tale of the Tape

The GLP SceneX 33.3mm LED pixel tape is just short of 10’ in length and requires half a DMX universe of control. The tape also comes in higher densities if needed. The tape we purchased came with a black backing that was very helpful in making the tape disappear when not in use. The diodes on the tape are RGB sets in one chip and mix quite nicely. The LED tape also has an amazing dimming curve compared to most other LED tape on the market. There is a large range of dimming with very little stepping, and then only at the lowest ranges. There is a small amount of stepping in the
Photo ﬁrst three percent, but this was at such a low intensity that it hasn’t created any issues with our use of it. The tape also has a good 3m adhesive on the back which works well if the surface is cleaned correctly. The LED tape sections have an in and out connector soldered on which makes connecting the units together easy. For our design, we used our tape in runs of two segments to create an approximately twenty foot tall line of diodes. For the input led tape, we cut off the factory connector and replaced it with a 4-pin XLR. We used our small inventory of four pin scroller cable as extensions from the tape to our new pixel drivers.

The PP4 Pixel driver has four 4-pin outputs that the LED pixel tape connects to. It is packaged in a 1 RU rackmount unit and has power con in and out. All of the connectors on the unit lock making it perfect for its designed use. The PP4 Pixel driver contains both the DMX decoders and the power supplies for a full four universes. The unit’s parameters can be changed via a web browser through its IP, which is user set able. The PP4 also has quite a few built in test patterns that can be used to check the diodes on the tape too. We found this was a super useful tool when troubleshooting some bad connections on our jumper cables. Within the web browser you can set the type of tape you are connecting, change the order of the diode control (Ex. RGB to BGR), the universe the tape is on, and a few other very useful options. We found that the conﬁguration of the PP4 Pixel drivers needs to be done without the presence of an art net signal.

The best part of this unit though, is the way it cuts down on used end wiring. With the PP4, many components are removed from the signal chain compared with regular pixel tape. With most typical pixel tape setups, each universe of tape would need three separate components (Art net node, DMX decoder, and a power supply). By using the PP4, you only need one box for every four universes of tape. It cuts the complexity way down and makes pixel tape so much easier to work with. The only downside I saw (or rather heard) on the PP4 was the fan noise. Obviously, with four universes of LEDs to create heat on the power supply, the large fan supplied was needed. That being said, with the rack mounts, we were able to put the PP4s in a case backstage to minimize noise. Our longest 4-pin run was ﬁ fty feet, and we had no issues. GLP did warn about going longer than this on our extensions. We had to do a bit of learning to get started on this project, but Carl and the entire team walked us through everything step by step and made it really easy. 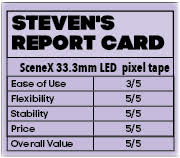 They were the most valuable part of this product. Their support was second to none. I think the PP4 will revolutionize the way pixel tape is done, as it already has with our team. I’m excited to see this product used more to help the church spread the gospel.

Steven Hall has a passion for lighting and anything that creates a visual environment for worship. He is currently the Lighting and Visual Director at Journey Church in Norman, OK where he lives with his wife, Sara, and son, Dorian.