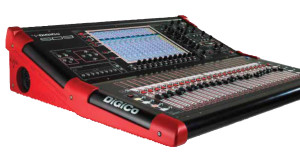 Celebration Church in Jacksonville, FL, has been my home for the last ten years, eight of them as the Audio Coordinator and one as the Technical Director. Our church has always had a knack for implementing technology into our services, whether that be using lighting projectors or any other instrument to make the congregants feel submersed in the experience. Submersing congregants in an experience requires ﬂ exibility, quality and above all a resilient willingness to go where no other console has gone before. Celebration services don’t stop, they don’t delay, and they don’t push back, and one of the core values of our church is to respect member’s time.

One of the greatest challenges we faced was selecting an audio console. Our decision was based on our need for a product that had quality, ﬂ exibility, teaching ability (for volunteers), and redundancy and, on top of all that, great customer service. Infocomm 2011 was when I ﬁ rst came in contact with a DiGiCo SD console. After a few rounds of testing, we decided to pull the trigger and purchase two DiGiCo SD10s, one SD10b, and two SD9’s for our satellite campuses.

Fast-forward three years: we are now well acquainted with the DiGiCo SD line. In the Arena we have one of the SD10s at ‘Monitor World’ and another at broadcast. The SD10b and SD10s share the same frame, faders, and basic interface. In the Celebration Arena the SD10b lives at FOH, is mainly due to its surround sound capabilities. The Celebration Arena has a pretty massive “surround sound” infrastructure, so we needed a console that will let us sweep a full 360. The automation on the SD line also makes it a breeze to fully automate these surround sound changes and, with the little joystick, it’s actually fun to use.

Speaking of automation, on the SD lines automation is pretty straightforward; I found the “capture” feature very useful. The capture feature lets me record all of my movements (as complex or simple as I want) to a snapshot. Once the console has recorded all of my movement it will display every one of them as a line value. I can either choose to edit/delete/ or add as needed. The Snapshots on the SD line makes sense, and are very easy to read – especially for volunteers.

Celebration church audio engineer Alex Flores comes from a recording studio background and I also had my day in the caves; we both agree that we always need good preamps. I guess you can call us preamp snobs! To our surprise, we found the preamps on the SD line have some very nice qualities typically only found in high end recording pre amps. Case in point, the DiGiCo pres like to be “driven”; this adds a certain layer of color to the tone. The effect can also be obtained by using the DiGiCo Digitubes, which are built in digital tube emulators. The Digitubes are great on strings where they can be subtle, or they can really push the envelope on a snare. Another major plus for the SD line is channel count. On a typical week, we use 40-62 inputs to the SD10 consoles (all three consoles are linked via ﬁ ber), and in a special event we can tap the full 96-channel count. Of course, the ALT-Input option comes in handy at that point. Alt-Input is a real lifesaver; allowing me to have a backup for primary microphones, while also letting me change full bands with the push of one button (this can be automated as well).

The SD9 was the clear option for our satellite campus, besides the channel count and one less fader bank the features are pretty much the same from the SD10. One feature that has helped our satellite campus is the use of an external screen. On the screen we set a birds eye view of the whole console. This may seem menial, but being able to monitor all inputs and outputs at a glance while leaving the main screen to make EQ/Compressor changes or routing changes is huge.

The SD console interface is laid out like an “analog”, with channel strips. This means Head preamp top, which ﬂ ows 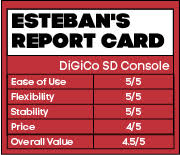 into the EQ, which ﬂ ows into compressor and leads to the AUXES. This layout scored major points with us! Having a volunteer who came from an analog background who already felt ‘familiar’ with the board was priceless.

Over all, the DiGiCo SD line has been a pleasure to work with. Preamp, interface, and features are unmatched moreover and we look forward to all that DiGiCo has to offer in the future.

Esteban Orozco has been the Technical Director at Celebration Church in Orlando, FL, for over 10 years. Check out their website at www.Celebration.org