Valley Baptist Church in Bakers­eld, California is a growing multicampus ministry. With 4500 in weekly attendance, the church produces television for external and internal use. With our Today’s Walk broadcast on TV and Radio, quality is very important to us. Our on-line viewing is growing with live and video on demand of worship services, broadcast and special programming.

We were an SD facility since 2005, starting with Echolab as our main SD-switching, which worked very well for us for 10 years. The time came to update to HD, and we spent about four years researching different solutions before we stumbled on to FOR-A. They came out with the HVS-2000 in 2014 and I was immediately impressed by the features and outputs that we really wanted.

The FOR-A switcher allows us to have multiple panels for the three live switches we do live – broadcast, IMAG and web – all three simultaneous. For this we use 3 FOR-A control panels on our HVS-2000. We use the HVS-2240OU 2E ME panel for broadcast, and two HVS-391OU panels, one for IMAG and one for web live. ‑is allows better volunteer participation in production. We run eight keepers in operation regularly on a Sunday. ‑is switcher handles it all with no problem – plus offers a bunch of other options. A web GUI-panel is available that could run any of the six onboard MEs. It was important for us to not get shoehorned into not going 4K; this switcher does have 4K capability

Flexibility is important. The HVS-2000 does whatever we ask. ‑e aux buses for example let us do a dissolve on those buses. The stock system has more than enough inputs that I wasn’t going to have to throw a bunch of cards into it to expand if needed. I quickly began to realize that the main 2ME panel was laid out to make sense. User buttons on the panels allow easy changes. FOR-A has soware updates coming out all the time that just keep improving the switcher as well, adding features which is amazing. We really like the Midas-Touch GUI panel built-in to the panel, plus an external large touch screen for really quick setups and changes. We utilize the clip play to do transitional wipes; plus 6 still stores we use weekly. We were so impressed with the switcher we ended up buying a bunch of other FOR-hardware. It all works extremely well together as a complete system.

­This past summer we again participated as a Global Leadership Conference (GLS) satellite campus. Willow Creek church requested a live feed from us. We were able to easily feed to Chicago without having to do any configuration changes. We like that you can throw special stuff in our workload and we can do it without eort or concern. Just like you have in any broadcast facility, it allows you to do anything you want.

­The touch-screen interface that allows us to set-up macros really fast, make changes on the fly, and save scenes and configurations for easy-access and recall. We are using the system with Pro-Presenter, and it does have an interface that allows us to work with it directly through the panel. ­e switcher interfaces to any playback equipment from old beta decks to modern servers.

While we use a larger FOR-A MV-4200 multiviewer, the HVS-2000 does have a two channel multiviewer built in. ­This can be expanded up to four different outputs – so that’s a great feature as well. Tech support couldn’t be better – both east coast and west coast reps have been through the facility several times to make sure that all our updates are done correctly and everything are properly set. We can’t complain about anything at all. I’ve never actually worked with a company that is as responsive as FOR-A is. When we were setting our system up, they also set-up a system using our specifications over in Japan to test our configuration and make sure that it was going to run smoothly when it all came together. 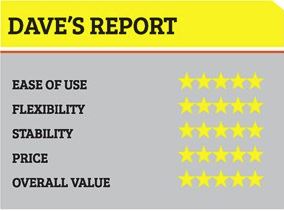 Being a good steward is important to me, and the price point on the switcher allowed me to also purchase a multi-viewer and an MFR-5000 Router, which I wouldn’t have been able to do otherwise. It works really well with our network over our subnet broadcast set-up, and we have great backup and hotswaps primed and ready.

DAVE KALAHAR IS THE DIRECTOR OF MEDIA AND BROADCASTING AT VALLEY BAPTIST CHURCH IN BAKERSFIELD, CA.