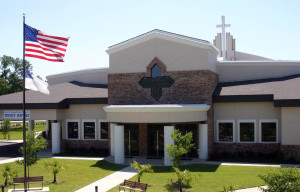 The sound system at Trinity Baptist Church in Ocala, Florida is quite sophisticated for a sanctuary that seats approximately 800 congregants. It delivers left-center-right imaging to nearly every seat from multiple loudspeaker positions, including six time-delayed left-center-right zones that cover the areas farthest from the pulpit. This system was installed by Pro Sound & Video in 2004 and although the loudspeakers and amplifiers have held up well, the original DSP processing system that performed the complex routing and filtering did not. Florida-based Pro Sound & Video, Inc. replaced the original processing system with two Symetrix Radius 12×8 Dante™ network audio DSPs and augmented their sixteen combined outputs with two SymNet xOut 12 audio output expansion boxes. All of the units network seamlessly via Dante and replace all of the old analog processing, with plenty of processing power to spare for improvements.

“The system at Trinity Baptist is really nice with almost every seat getting a left-center-right experience,” said Michael Frazee, project manager with Pro Sound & Video. “However, the old processing system was based on a system of five digital processors that were cross wired with analog and AES patches to share various signals between the processors. This worked well for a long time, but one of the main processors went bad, and since the original components are out of production, it became clear that a new system would be required. To say the least, the Symetrix new generation of open architecture, Dante networking processors would afford us a considerable amount of signal handling flexibility to handle the complex processing tasks required for the multi-zone LCR system.”

The required processing includes equalization, distribution, and crossovers for the various speaker zones, which are comprised of the main house system, distributed LCR systems, stage monitors, and additional recording and general distribution mixes. Two Radius 12×8 DSP and two xOut 12 audio output expansion units form one integrated processing network via Dante with 24 inputs and 40 outputs. Programming the system, despite its complexity, was straightforward using Symetrix’ Composer software. “Circumstances in this case necessitated my involvement at the programming level. The Composer software was very predictable, but when I ran into a few snags, I contacted the tech staff at Symetrix, and they were very helpful in resolving programming issues.”