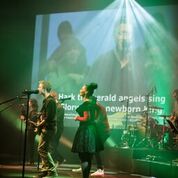 Flatirons Community Church in Colorado is renowned for its unique and dynamic atmosphere, attracting 20,000 congregants to the house of worship each week. To best serve such a large amount of people, it has adopted a multi-campus approach that includes video production and live streams between three facilities and to visitors on the Web. Keeping up with the frenetic pace of all that goes into the daily routine, the audio director at Flatirons requires high-quality equipment, including DPA microphones, to ensure every facet of the services are pristine.

Flatirons Community Church Audio Director Bryce Boynton turns to almost all of DPA’s solutions for assistance with his live, recorded and streamed audio needs. These include microphones from nearly all of DPA’s product lines, such as d:facto(tm) Vocal Microphones, d:fine(tm) 66 Headset Microphones, d:screet(tm) 4061 Miniature Microphones and d:dicate(tm) 4006, 4011, and 2011 Recording Microphones, along with all available d:vote(tm) 4099 Instrument Microphones.

“One of the best things about DPA microphones is that discovery is half the process of using them,” says Boynton. “Every day I find a new application for them. Once you become familiar with them, you recognize that the numerous ways you can effectively mic a source continues to grow. It’s all a matter of having a small collection of microphones with additional accessories that allow you to do more, and that’s where DPA really shines.”

For Boynton, it’s not just the versatility of the products that benefit productions. “They’re really responsive, they have high SPL handling capability and their off-axis frequency response is great for post production,” he continues. “We’re trying to emulate a live experience when we put our concerts on the Web, so it’s important for us to use mics that blend well together. We’re fortunate to have really great musicians and an awesome sound system, so adding the DPA microphones to the mix helps to yield great results.”

Boynton employs the d:facto(tm) Vocal Microphones primarily for the rock-style performances of the church’s vocalists at the Lafayette Campus, where he says they mix well both live and in post-production, making for a very natural-sounding blend. “Some competitor microphones pick up background noise in an unnatural way, but the d:facto(tm) is crystal clear in the presence and air range, without having to boost those frequencies,” he explains. “Additionally, it doesn’t build up too much proximity effect on the low end, which is really helpful. The thing that really sets the d:facto(tm) apart from any other handheld vocal microphone is its ability to go from wired to wireless. To me, that’s absolutely genius. It’s the only mic out there that has this feature, and I love it because I set it up differently every week.”

Also supporting the house band is a combination of the company’s d:vote(tm) 4099 Instrument Microphones and d:dicate(tm) 2011, 4011, and 4006 Recording Microphones. “The d:vote(tm) 4099 is the most versatile of the DPA microphones,” says Boynton. “There are so many mounting options and wireless adapters, that you can put them on anything. We have used them on sources from tom drums to piano, accordion, banjo, violin, cello, upright bass and even as house mics. The d:dicate(tm) 2011 Twin Diaphragm Cardioid Mics, meanwhile, feature the best value-to-sound quality ratio. I’d buy this microphone over the most popular small-diaphragm solutions any day. There just aren’t many options that sound as good and are as versatile as a d:dicate(tm) 2011C for under $1,000. It’s especially great because you can use it on a variety of pre-amplifier bodies for different applications, or switch it out for another capsule type, like the d:dicate(tm) 2006C Twin Diaphragm Omni Microphone. The d:dicate(tm) MMP-C Compact Preamp provides an excellent ‘musical’ sound quality in a very compact footprint. It works with the variety of d:dicate(tm) accessories seamlessly, and I particularly like the variety of cable and shock mount options. Where we can, we also like to place our d:dicate(tm) 4011 and d:dicate(tm) 4006 capsules on the most pristine of sources, such as drum overheads, our leslie cabinet or our grand piano.

The DPA d:fine(tm) 66 Omnidirectional Headset Microphones help provide rock solid reliability and exceptional sound quality for the critical sound path of the teaching pastors. Flatirons has two teaching pastors, and they both rely on the d:fine(tm) Headset for all speaking events, whether in the main auditorium, or retreats and other events on the road. “We used to have a competitor brand, which we made do with for a long time,” continues Boynton. “Once we switched to the d:fine(tm) Headset, everyone remarked on how it sounded more natural, like someone speaking right in front of them without a microphone. I notice that in the low end in particular. The d:fine(tm) Headset is way less prone to feedback and has a lot more fullness without being ‘boomy’. The pastors like the mics, too, because they sit very comfortably for the five hours of speaking they do over a weekend. They don’t even think twice about wearing the mic, they just have it on all the time.”

In other areas of the building, such as its smaller auditorium, Boynton commonly utilizes the new d:screet(tm) Necklace microphone. “I’m using it with people who have little experience using a headset microphone,” he explains. “In that situation, a headset can sometimes be a bit distracting. The d:screet(tm) Necklace is great because they don’t even realize they are wearing the mic. It sounds so natural, and anyone can put it on without having to think about where it should sit. It’s really useful for workshops, meetings and any function where you don’t have an experienced sound tech but have a great presenter who wants to be heard in a very natural way.”

Flatirons values and teachings are 100-percent bible-based with an open-door approach. Based in Colorado, Flatirons has three campuses, one in Lafayette and one in Genesee; a third campus just recently opened this fall and serves as a Sunday rental of the historic Paramount Theatre in downtown Denver where the church hosts Sunday evening services. For more information, visit: www.flatironschurch.com. Service archives and a recent performance can also be found here: http://www.flatironschurch.com/messages/,
https://vimeo.com/124690439#t=1054s