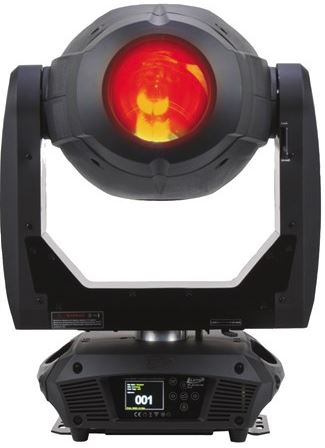 Eastside Christian Church is a non-denominational church in Anaheim, Southern California, with a new campus built in 2012. ­They currently have two multi-site campuses; their main broadcast campus and a new campus opening in September. Worship style is contemporary, with the worship bands at each sanctuary performing the same set of songs the majority of the time. Each campus has their own lighting console, and one of our campuses doesn’t have moving ­fixtures, but we try to keep the look and feel of worship the same as much as possible.

We recently added Elation Professional’s Platinum FLX ­fixtures at our main sanctuary. We are right down the street from Disneyland, and had seen a ­reworks show there that had featured Elation’s SBX hybrid ­fixtures, and had been very impressed by what how they performed. However, they didn’t have color-mixing, which is very important to us. I heard that the Platinum FLX, which did have this capability, was coming out in 2016. We purchased 14 of these ­fixtures as soon as they were available.

Eastside’s current lighting rig at our main campus is pretty impressive, including 14 Rayzor Q12 Zooms, 10 SixBar 1000s from Elation, 12 ETC Vivid’s, six VL880s, four VLXs from Vari-Lite. We also utilize four CuePix WW4 Blinders, also from Elation. The Platinum FLXs were purchased to replace some of the VL880s (we originally had 12 of them), and to upgrade our system with newer fi­xtures that could do more. 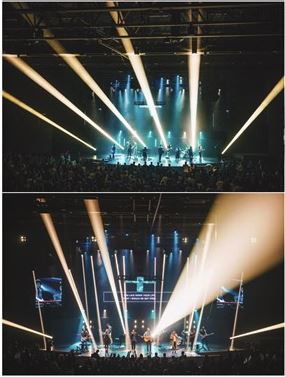 Adding the Platinum FLX adds a full feature set that wasn’t available to Eastside in one ­fixture before. The Philips™470W Platinum 20R lamp provides bright, even lighting, and the ­fixture has won praise for its independent dual optics. An effect that I enjoy is the ability to create a gradient pinpoint beam effect, using the iris-reducing gobos on the ­fixed Gobo wheel. With the 8-facet prism, when we zoom out we get a spinning ray-of-light effect. The color mixing is also an important aspect of the ­fixture, allowing us to keep distractions low. Moving color wheels can be very distracting when used in the wrong place, but the FLX lets us mix any color we want and fade it into the mix without jarring the audience with a sudden color shift.

We purchased the Platinum FLX’s through Visions Lighting (now part of 4Wall Entertainment) and installed the gear ourselves. Programming and hanging the ­fixtures was pretty elementary. The fi­xtures were so new to the market when we received them that I had to create a fi­xture profi­le in our GrandMA2 Ultra-Light, which was an interesting learning experience. It took about a day of tweaking to create the profi­les, but the ­fixture has been around long enough now that profi­les are available for most consoles. We had all the ­fixtures running in our rig within a week of receiving them. 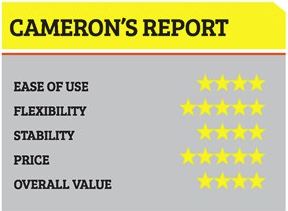 The Platinum FLX has totally changed Eastside’s lighting game. Having such a flexible ­fixture allows us to create looks that we never were able to do before. Plus, at the price point we were able to get them at, we are able to get more bang for our buck.

CAMERON BENTLEY IS THE PRODUCTION ENGINEER AND LIGHTING DIRECTOR AT EASTSIDE CHRISTIAN CHURCH. HE GREW UP AT EASTSIDE AND STARTED VOLUNTEERING IN THE CHURCH AT THE AGE OF 12.