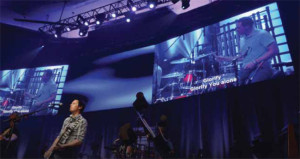 Since early 2010, Fairhaven Church’s Centerville, OH campus has been renovating, especially regarding technology, while at the same time running four weekend services in our 1,500-seat Worship Center. We recently debuted a 135-panel Elation Professional EPV6 LED video screen with high-resolution 6mm pixel pitch, with the help of Scenic Solutions for our Easter Services. We chose to go with an LED wall due to our desire to “future-proof” the Worship Center and set us up for the next decade or more visually. In March 2012, some of our Ministry Arts staff attended the Seeds Conference at Church on the Move in Tulsa, Oklahoma and were blown away with their two 16×9 LED screens and how much “pop” it gave to their visual experience.

Before the LED wall, we used 3 projectors that were over 10 years old and nearly 100’ away from the actual screens, which were starting to warp. We were going through lamps every six months (if not sooner) and the visual quality was getting noticeably worse over time, especially within the last couple years. At times, we would even intentionally overexpose our camera shots in an attempt to at least have *something* half-decent looking on screen. Since the projectors were in the control room, we also had a 20+ degree temperature increase on Sunday mornings, which could get pretty uncomfortable during the summer months since the HVAC couldn’t keep up with all the heat generated in the room.

When we factored in these considerations, as well as the great visual element the LED walls would provide, we were sold – new LED walls were the way to go, instead of just replacing our old projectors with newer, better projectors. Our new LED wall is 52’ across and comprised of 3 screens with 45 panels per screen for a total of 135 panels. We currently have each screen tethered together to create a wall with a 3:1 (16:3) aspect ratio and adjust its height from time to time depending on the speciﬁc service or weekend needs. All three screens, which can be individually operated, are free hung on separate trusses via Stagemaker Motors (2 per truss). On Saturdays the center wall is ﬂ own in to the deck for a pre-taped sermon while on Sundays it is lifted into position and laced together as one screen for live performances. Working with the new LED panels from an upstage truss are 8 Elation Platinum Spot 15R Pro ﬁxtures, full color-mixing 300W moving heads with an output that matches 1200W fixtures but at a fraction of the power consumption.

At this point, we want to ease our congregation into this new gear and be conservative with our usage of the panels, although from time to time we still will produce special in-house videos that span the entire length of the wall. Eventually the vision is to either install a grid system in the ceiling (and replace the existing catwalk) that would allow us to shift the wall’s placement from side to side, front to back, and up or down…or split up each of the panels to use for additional staging elements, integrated into the platform design for that particular weekend or message series.

The most obvious advantage of the LED wall has been the visual impact it has throughout our entire room now. It adds an entirely new presence that can be overwhelming, if not used tastefully. We’ve been joking that we went from having gear that was nowhere near “good enough” to gear that is “too good.” It’s deﬁnitely been a process adjusting from old projectors to high-end LED’s, but I’m conﬁdent that our team will be able to creatively and tastefully use the LED wall as we continue learning what we ﬁnd works & doesn’t work to suit our particular needs & preferences.

I appreciate the density of the EPV6; it looks good when you’re close to it on stage, and the contrast ratio is great. The panels are surprisingly thin & lightweight, especially considering their incredible quality, and the ease of connectivity is impressive! With integrated power / data onboard (Powercon in/out for power link, Ethercon in/out for video signal) the panels can be easily daisy chained. Our own Ministry Arts staff team was able to assemble each 9×5 panel screen together with simple directions from Elation and Scenic Solutions.

At the moment, the video wall is primarily used for worship services each weekend and, occasionally, other church-related events. However, if we take advantage of its capabilities, we could also use it for outside events. We recently hosted a “Sovereign Tour” concert with Michael W. Smith as well as the “Love Worth Fighting For” conference with Kirk Cameron & Warren Barﬁeld. As time progresses, our desire is to become more creative as we adapt to this new technology. Right now, the only thing limiting us is our own creativity!

Currently, we have a Tech Team “volunteer army” of around 25 talented, dedicated people ranging from ages 13 to 65. For any given worship service, there are 10 positions that need to be ﬁlled at the Centerville Campus. Each volunteer goes through a “shadowing” process where they’re able to sit in on a rehearsal or service to ask questions as well as learn their speciﬁc role, whether it’s operating a camera, ProPresenter, audio, or lighting. Video processing is from six Elation EVP VSC video controllers, two processors per screen working on separate circuits to provide complete fail safe redundancy. The EVP VSC processors are located some 250 feet away from the screens in the media room. A pair of Elation EPV DVI 4 splitters feed the six EVP VSC video controllers for duplicated signal processing of separate areas of the same video signal feed. Content to the screens comes from an Elation ZEUS media server with Arkaos Media Master Pro utilizing a 3840×1080 signal path. Visuals are triggered via keyboard shortcuts and for Easter services, volunteers reportedly handled the visual content with less than 5 minutes of training thanks to the Arkaos presets. 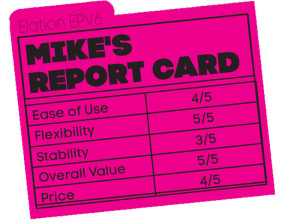 The debut of the LED wall at our Easter services provided an incredible visual experience for the nearly 8,000 attendees that weekend, as we were able to create custom in-house videos that spanned the entire length of the wall, really tying in the themes of our songs and other special elements together well. Even on a “typical” worship weekend with no specials per-se, the clarity and quality of the IMAG and text makes for an outstanding experience from anywhere in the room.

Mike Rall has been the Director of Video and Technology Arts at Fairhaven Church since November 2010. Follow us on Twitter at @FairhavenChurch or check out our weekly messages   and custom in-house videos at fairhavenchurch.org/media.