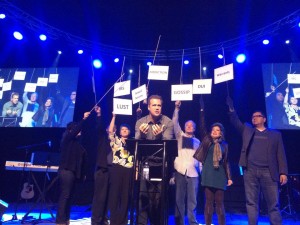 Since opening in 2006, Youth and Young Adult Pastor at Real Life Church in Sacramento, Tyler Hagan, has always had a bigger vision for the ministry’s lighting, so when the church decided to renovate their sanctuary space in 2013, he saw the opportunity he’d been waiting for.

The ministry bought a new building four years ago but after tiring of packing 1000 people in a room with 10-foot ceilings, a construction project was initiated that expanded the space and raised the ceiling. Completed in December, the renovation includes a new Elation lighting system for the 700-seat sanctuary made up of Platinum Spot LED IIs, Design Wash LED Zooms, and Opti QA PAR LED lights, as well as Opti Tri White LED fixtures, which they use as house lights. The installation also includes trussing from Global Truss.

The renovation is the first time Real Life has made a substantial investment in dynamic lighting but not everyone at the church was initially sold on the idea. “We did have to bring people into what we’re doing. Different generations have different opinions when it comes to lighting,” Tyler says. “Sometimes the older generation can look on lighting as an abstraction but I’ve always looked on it as an addition, especially in a worship atmosphere where you can really set the tone for the day. We weren’t running haze before and now we are so seeing the beams is new for some people but they are really liking it.”

Tyler’s dad and Real Life founder, Senior Pastor Scott Hagan, is one important member of the congregation in which dynamic lighting was something new. “Once he saw what the system is capable of, it opened up opportunities for him to do interesting things with his messages,” Tyler says. “He realizes the light is there to support the message.” 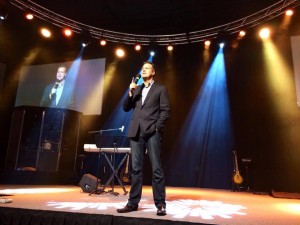 On a 30-foot diameter half-circle truss in the 700-seat sanctuary hang six Platinum LED Spots, which Tyler often uses for fly outs with gobos or irises down for a nice beam effect. “People think they look like light sabers, which is always a hit with the younger crowd,” he says. Also on the half-circle truss are four Design Wash LED Zooms along with 8 Opti QA PAR LED fixtures, with an additional eight Opti QA PARs on an FOH truss, which are used for front stage wash color. “I train students on all the gear so they can help serve and run it,” says Tyler, who describes Real Life as a very neighborhood-driven church where high school and junior high school kids often get involved.

In a unique use of LED, 44 Elation Opti Tri White LED fixtures are rigged in the ceiling and used as house lights. “When people look up they realize that it’s different than a typical church,” Tyler states. “LDs who visit the church notice it as well.” Using the white LED fixtures as house lights is something innovative that was done in cooperation with Illuminate Productions, who supplied the system and did the install. “With the flexibility and long term energy savings, it was a no brainer,” Tyler says. “We’ve hosted events for other churches and they often ask about our install. I tell them that the energy savings alone is totally worth it.” An additional 6 Opti Tri White LED fixtures are used for front light.

The new lighting rig is used to visually support services on the weekends but is also used for events and conferences by other groups that rent out the space. “What this install has done is it has made our building desirable for others who want to use it,” Tyler explains. “We’re the only church in our area conducive to doing bigger events and the Elation install has put us on the map to do concerts and conferences like the Arise Women’s Conference (March 21-22). Even though our system is still pretty simple, it really has brought our church to the next level and is a massive step in the direction that we want to go.”